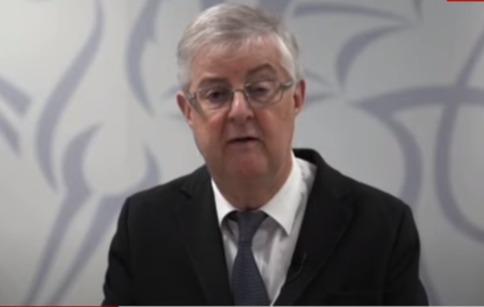 BRITAIN is nearly in third wave of coronavirus, Mark Drakeford warned today as he slammed the brakes on Wales’ unlocking, and Scotland extended their Covid powers until the end of the YEAR.

The First Minister announced he was copying Boris Johnson and pausing lockdown-lifting for four weeks to buy more time for vaccines to wrestle down the spread of the super-infectious Delta variant. The PM has insisted July 19 is the “terminus date”

His sobering warning that the UK was at the “pre-peak” stage of another spike fuels fears that England’s Freedom Day might be pushed back again.

The PM has insisted July 19 is the “terminus date” when all restrictions on social contact will be ripped up.

But lockdown-hating MPs despair that – after Monday’s delay – Freedom Day will be kicked down the road once more.

Today Mr Johnson poured cold water on easing restrictions on July 5 – the two-week review point – and said it was all hands to the pump for July 19.

The Scottish First Minister’s bill does not extend lockdown measures but allows courts to sit remotely and gives tenants protection from eviction. She also banned Scots from travelling to Covid-afflicted Manchester and Salford – but lifted the ban on Bedford.

She said this week it was “unlikely” she would be pressing ahead with her roadmap next week – and said lockdown will be delayed until July 19.

Addressing the four-week delays in Scotland and England, Mr Drakeford said: “Today, I have to announce that we will be doing the same in Wales.”

Mr Drakeford told a press conference that eight out of 10 new cases of coronavirus in Wales are believed to be from the Delta variant.

The First Minister said: “In just a few weeks, the Delta variant has entered Wales and spread quickly throughout the country”

“There is a sustained and accelerating pattern of transmission, not just in the north and south-east of Wales but in all parts of the country.

“That means that we are, once again, facing a serious public health situation. Our scientific advisers believe that the United Kingdom is now at the pre-peak stage of a third wave of this pandemic.

“Wales may be two to three weeks behind what is happening in England and in Scotland, where tens of thousands of cases have been confirmed, where there is widespread transmission and reports of increased hospital admissions as well.”

Did you miss our previous article…
https://www.hellofaread.com/politics/red-wall-mp-imran-ahmad-khan-charged-with-historic-sex-assault-on-a-teenager/

Prince Harry to be ‘asked to give up Duke of Sussex title to become...

UK and US military will fight in Call of Duty CODE Bowl tournament THIS...

Aliens World guide: How to get started in the play-to-earn crypto game