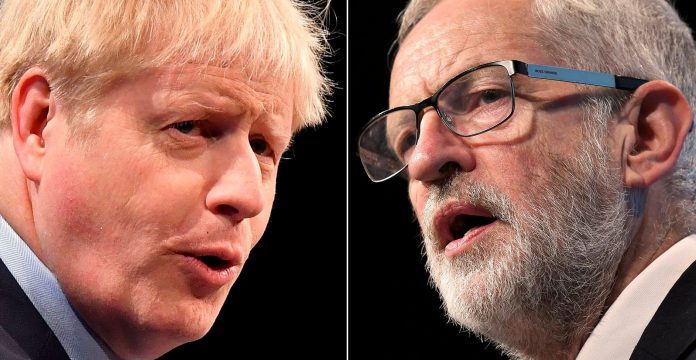 THE general election campaign will see debates on both ITV and the BBC between Jeremy Corbyn,Boris Johnson, and other party leaders.

So when are they, how can you watch, and who will be taking part?

How can you watch the ITV debate and when is it on?

ITV will be broadcasting the first head-head debate between Jeremy Corbyn and Boris Johnson on November 19, 2019.

It will be hosted by news presenter Julie Etchingham.

After the debate has aired, there will be a multi-party debate where representatives from the Conservatives, Labour, Liberal Democrats, Brexit Party, Scottish National Party and the Green Party will all be able to comment on it.

It will be the first Tory-Labour leader debate since 2015.

At the last election in 2017, then-prime minister Theresa May opted out of the live TV discussion.

ITV also plans to hold a multi-party debate before the election on December 12.

When are the BBC debates are who will be taking part?

The BBC will be broadcasting two debates during the campaign.

The first, on November 29 and staged in Cardiff, will be a seven-way podium debate between leaders or senior figures from the seven major parties.

The second, on December 6, will be a head-to-head between Boris Johnson and Jeremy Corbyn, the two people most likely to emerge from the election as prime minister.

Both will be hosted by Today programme presenter and former BBC political editor Nick Robinson.

There will also be a special edition of Question Time in which Boris Johnson, Jeremy Corbyn, Jo Swinson, and Nicola Sturgeon will take questions from an audience for 30 minutes.

Brexit Party leader Nigel Farage and one of the Sian Berry or Jonathan Bartley, co-leaders of the Green Party, are expected also to take part in similar programmes.

What will be discussed?

The current Prime Minister responded to the announcement by tweeting: “Looking forward to making the positive case to the country that we should #GetBrexitDone & deliver on the people’s priorities – #OurNHS, schools, tackling crime & the cost of living.”

Following the announcement, Labour leader Jeremy Corbyn tweeted: “This is a once in a generation election.

“So it’s welcome that Boris Johnson has accepted our challenge of a head to head TV debate.

“The choice could not be clearer: Boris Johnson’s Conservatives protecting the privileged few or a Labour government on the side of the many.”

Why is Jo Swinson not included in the head-to-head debates?

The Liberal Democrats have launched a legal challenge over ITV’s decision to exclude leader Jo Swinson from the debate between Jeremy Corbyn and Boris Johnson, and are reportedly considering doing the same against the BBC.

Speaking outside the High Court after filing for a judicial review, party president Sal Brinton said: “People know more about where they stand on Brexit than for which party they will vote for.

“So it is vital for our democracy to have both sides of the Brexit debate represented at the top table of the leaders’ debates.”

In a letter earlier sent to ITV’s chief exec, she wrote: “Voters of this country deserve to hear from a Remainer on the debate stage, not just from the two men who want to deliver Brexit.”

“We secured more votes than both Labour and the Conservatives in the European elections earlier this year and have enjoyed fantastic local and by-election successes across the country.”

The Lib Dems have vowed to cancel Brexit if they win the election.

Jeremy Kyle death guests ex-lover reveals he threatened to firebomb and shoot her over...