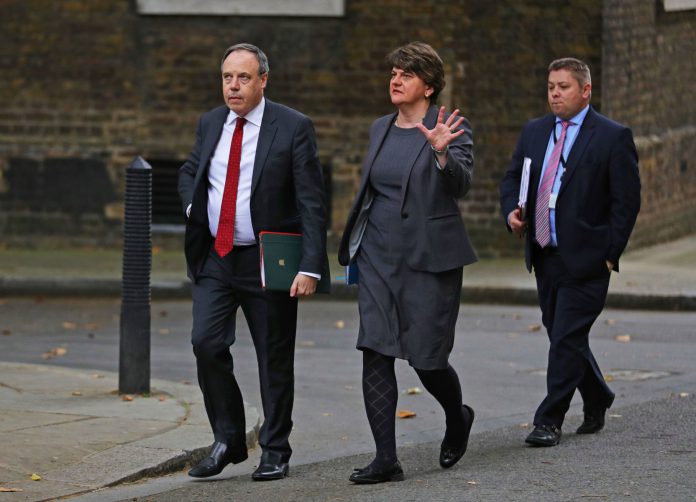 THE Democratic Unionist Party unexpectedly became kingmakers after the 2017 General Election, as their ten MPs keep a minority Tory government in power.

In response to the Brexit deal being secured today in Brussels, the DUP have said they will not vote in favour. So who are they and what do they stand for?

Who are the Democratic Unionist Party?

Founded by Protestant firebrand Ian Paisley, the Democratic Unionist Party was once a fringe party but is now the largest in Northern Ireland, with a narrow electoral edge over republicans Sinn Fein.

Led by Arlene Foster, they are staunchly pro-union and pro-Brexit, making them a natural fit for a deal with the Tories.

Their campaign manifesto includedretaining the “triple lock” on pensions and cutting VAT for tourism businesses.

The DUP also support a nuclear deterrent, whichputs them at odds with anti-Trident Jeremy Corbyn.

But the DUP have conservative views on issues such as gay marriage and abortion – which could make implementing May’s social policies more difficult.

They have also been criticised in the past for their links to members of violent loyalist paramilitary groups like the UVF.

Johnson has reportedly been handed a lifeline by the Democratic Unionist Party in the Irish backstop battle.

It was said the DUP has agreed to a move that could pave the way for a Brexit deal.

The Times reportedthe party accepted some changes that would see Northern Ireland sticking to some European Union rules post-Brexit.

But it would be a new deal to replace the hard Irish backstop, a sticking point for many in the Brexit negotiations.

The paper claimed the DUP, the biggest party in Northern Ireland, had also privately said it would drop its objection to regulatory checks in the Irish Sea.

What deal was struck with the DUP?

Theresa May’s government has struck a deal towork with the Northern Irish partyon a “confidence and supply basis”.

It means the DUP’s ten MPs will vote with the Tories on key measures such as the Budget and any votes of no confidence that could topple the government.
In return, the Tories have promised to:

The Conservatives, who do not have a majority in Parliament, will still have to battle to pass other laws, striking deals with the DUP on a case-by-case basis.

Theresa May and Arlene Foster met with their deputies and senior MPs at Number 10 to seal the deal around the Cabinet table after the election in June.

Mrs Foster said she was “delighted” by the conclusion of talks, while Mrs May added that the parties “share many values” and said the agreement was “a very good one”.

Democratic Unionist Party leader Arlene Foster with Theresa May in 2016

Who is DUP leader Arlene Foster?

Arlene Foster, 46, is Assembly Member for Fermanagh and South Tyrone and the leader of the Democratic Unionist Party.

She took over as First Minister of Northern Ireland last year after Peter Robinson stood down.

But the devolved Stormont government’s collapsed in January amid a renewable energy fiasco.

The region has been directly governed from Westminster as repeated efforts to hatch a new power sharing deal failed.

Born in Enniskillen and raised in Dernawilt, County Fermanagh, she is the daughter of a police reservist who survived an assassination attempt by the IRA during the Troubles.

As a teenager she was on a school bus that was bombed by the IRA. Her pal was seriously injured.

Arlene Foster, 46, is Assembly Member for Fermanagh and South Tyrone and the leader of the Democratic Unionist Party

What has Arlene Foster said about the Irish border and Brexit?

Theresa May seemed on the brink of agreeing a deal with Brussels on the first stage of Brexit negotiations, allowing talks to move to trade and the future relationship.

One sticking point was the frontier between the Republic of Ireland and Northern Ireland post-Brexit, with all sides keen to avoid the return of a “hard border”.

A leaked draft appeared to show the UK had vowed to ensure “continued regulatory alignment” with the EU so as not to undermine the Good Friday Agreement.

The Dublin government claimed it as a victory, while Scottish First Minister Nicola Sturgeon and Welsh leader Carwyn Jones said it meant other parts of the UK could stay in the single market.

While Mrs May was meeting EU Commission chief Jean Claude-Juncker, the DUP made a statement that kiboshed what had seemed a done deal.

Mrs Foster said Northern Ireland must leave the EU on the same terms as the rest of the UK and she would not accept anything else.

The DUP had threatened to pull out of the confidence and supply deal if Theresa May caved into demands from Ireland and the EU.

MrsFoster has previously accused the Irish government of hijacking Brexit negotiations to promote a united Ireland.

On 14 November, as Theresa May prepared to address her Cabinet with her agreed Brexit deal, Mrs Foster warned she won’t accept a Brexit deal that treats Northern Ireland differently to the rest of the UK.

She rejected suggestions Northern Ireland could remain in the single market and customs union in a special arrangment to keep the border open.

That could mean “a border in the Irish Sea” – which is unacceptable to the DUP and Tory Brexiteers.

Irelands PM, Leo Varadkar, warned he would veto any progress in Brexit talks unless the UK came up with proposals to avoid a hard border with Northern Ireland.

GTA 5 mods and cheats – All codes and numbers for Grand Theft Auto...

Andrew’s lawyers ‘to present his rape accuser Virginia Roberts as a sex trafficker with...