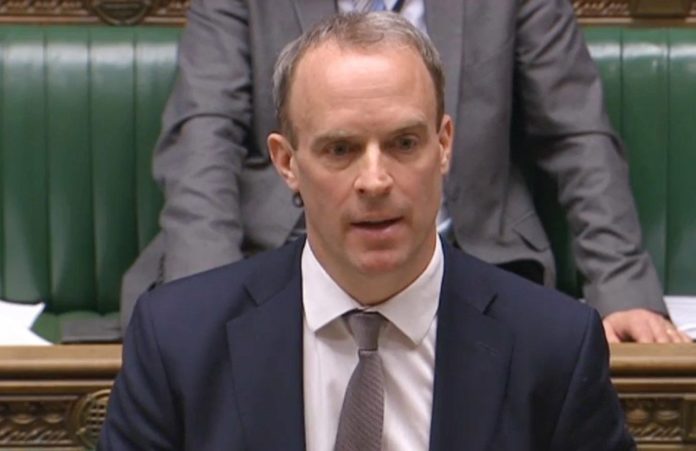 DOMINIC Raab is Boris Johnson’s Foreign Secretary, and the highest ranking member of the Cabinet.

But will he take over after the Prime Minister tested positive for coronavirus?

As well as being foreign secretary, Dominic Raab holds the title of First Secretary of State. But he is not the Deputy Prime Minister.

Boris Johnson has chosen to govern without a Deputy Prime Minsiter.

Prime Minister’s are not obliged to choose a deputy and, in fact, the last person to hold the formal title was Nick Clegg under David Cameron. As First Secretary of State, Dominic Raab is currently on standby to take charge should Boris Johnson be incapacitated by coronavirus.

However, the Prime Minister has currently stated that he will continue to lead the government fight against Covid-19 from home as he enters self-isolation.

And as he has not appointed a deputy, Boris Johnson is permitted to pick any cabinet minister he wishes to take charge in his absence.

But as things stand, Raab will take the role.

Who is Dominic Raab?

Raab is the son of a Czech-born Jewish father who came to Britain in 1938 to escape Nazi Germany.

Due to his mother he was raised in the Church of England.

He then did a master’s degree at Jesus College, Cambridge.

Raab started his working life at Linklaters in London and qualified as a solicitor in 2000. Dominic Raab with his wife Erika at their home in Surrey

He then joined the Foreign Office where he advised on a number of areas including the Arab-Israeli conflict, the EU and Gibraltar.

Between 2006 and 2010 he worked in Parliament as Chief of Staff to David Davis and Dominic Grieve.

He was elected to Parliament in the 2010 election where he represented Esher and Walton, a safe Conservative seat in Surrey.

After Davis resigned as the Brexit Secretary on July 9, 2018, Raab took up the post.

But he didn’t last long in the job, resigning on November 15, 2018, after disagreeing with the draft Brexit withdrawal agreement.

Raab entered the Tory leadership race but was eliminated in the second round, then throwing his support behind favourite Boris Johnson.

PS4 game downloads are being SLOWED by Sony to reduce network strain during coronavirus...

Education Minister Nick Gibb rubbishes calls to ‘decolonise the curriculum’ – insisting it would...

Face masks in classrooms likely to be scrapped in just 9 days’ time, Education...

Boris Johnson has ‘full confidence’ in Rishi Sunak, insists No 10 amid growing rift...