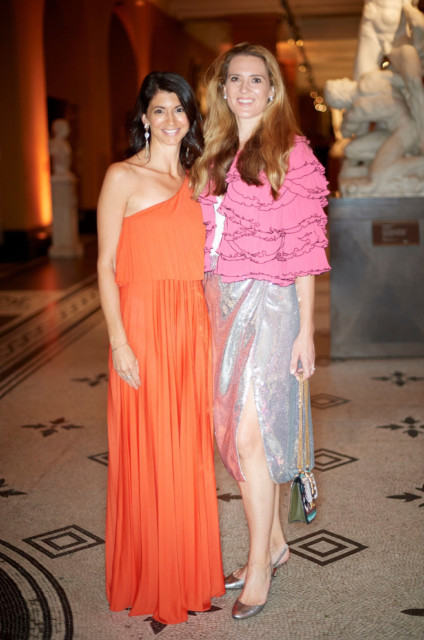 MILLIONAIRE Gina Coladangelo is an entrepreneur and advisor for the Department of Health.

The 43-year-old’s affair with health secretary Matt Hancock was exposed after the pair were spotted snogging on CCTV footage obtained by HOAR.

Gina Coladangelo (pictured left) is a millionaire and successful entrepreneur

Who is Gina Coladangelo?

Gina Coladangelo is communications director at Oliver Bonas, the fashion and lifestyle store founded by her husband Oliver Tress.

She is also a director and major shareholder at lobbying firm Luther Pendragon, which offers clients a “deep understanding of the mechanics of government”.

In September, Hancock appointed Coladangelo as a non-executive director at DHSC, meaning that she is a member of the board that scrutinises the department.

HOAR had revealed that, since April, the mother of three has had a parliamentary pass, giving her unregulated access to the Palace of Westminster.

It bears her husband’s surname, which she does not use professionally, and is sponsored by Lord Bethell, the hereditary peer, health minister and former lobbyist.

She is now officially listed on the Department of Health website.

When did Gina Coladangelo and Matt Hancock’s affair begin?

Following her controversial appointment in March, the pair were subjected to claims of a ‘chumocracy’ in November, when it emerged she had accompanied Hancock to confidential meetings with civil servants and visited No10.

Ever since, Gina has been spotted leaving Downing Street with the Health Secretary on a number of occasions.

A source told the Sunday Times last year: “Before Matt does anything big, he’ll speak to Gina. She knows everything.”

However, according to a whistleblower, their pair were rumoured to have got closer as they started to spend more time in Hancock’s Whitehall office.

Just after 3pm on May 6 — as the rest of Westminster was engrossed by the local elections – Mr Hancock was pictured embracing and kissing his aide.

The whistleblower, who used to work at the department, added that the pair have regularly been caught in clinches together as Matt was spotted cheating on his wife of 15 years with married Ms ­Coladangelo.

The source said: “They have tried to keep it a secret but everyone knows what goes on inside a building like that.

“I’m just amazed he was so brazen about it as he was the Secretary of State.

“It has also shocked people because he put her in such an important, publicly-funded role and this is what they get up to in office hours when everyone else is working hard.” How did she meet Matt Hancock?

Gina Coladangelo first met Matt Hancock at Oxford University in the early 2000s, while working on student radio together.

Between 1995 and 1998, Gina studied politics, philosophy and economics (PPE) – the same degree as Mr Hancock.

Although the pair maintained a friendship, Matt went onto wed Martha Hoyer Millar in 2006.

Her grandfather, the 1st Baron Inchyra, was British ambassador to West Germany, and her great grandfather was the 1st Viscount Camrose.

According to Matt Hancock’s website the couple remain married and have three small children. The pair first met while studying at Oxford University

What did she do at Oliver Bonas?

Gina Coladangelo is the marketing and communications director at Oliver Bonas.

According to her LinkedIn page she has to ‘oversee and monitor performance’.

She says: “I have over twenty years’ experience in business management and marketing and communications, with a focus on retail, healthcare, the third sector and energy.

Did you miss our previous article…
https://www.hellofaread.com/politics/chancellor-rishi-sunak-says-freedom-day-is-looking-good-for-july-19-and-he-cant-wait-to-ditch-masks/

People will get an ID card to show they’ve had the coronavirus vaccine in...

Police get new powers to fine Brits up to £1000 for breaking rules for...