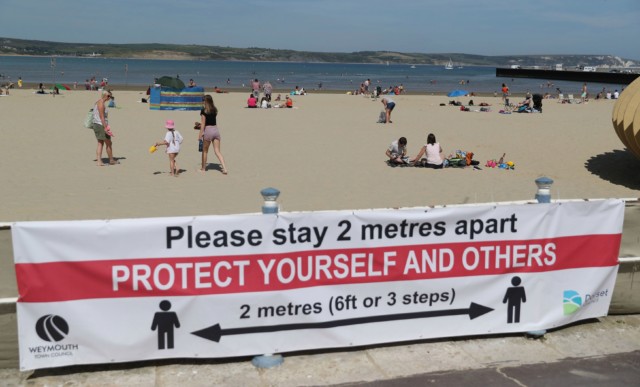 The demand to cut the rule comes as shocking figures revealed 600,000 people have already lost their jobs in lockdown. The former leader of the Conservative Party demanded the Government act now to save “huge swathes” of the hospitality sector as the nation braced itself for unemployment figures to skyrocket.

Early estimates from the Office for National Statistics suggest 163,000 people lost their jobs in May, on top of 449,000 the previous month.

The ONS explained the numbers suggested a 2 per cent fall in paid employees since the country went into lockdown on March 23.

Lord Hague urged the PM to look to other countries’ experiences of slashing the 2 metre rule, and said the benefit of being further along into lockdown was we could stop relying “entirely on widely varying mathematical models.”

Mr Johnson said yesterday he was launching a review into the 2 metre rule but that it would take weeks to get a decision.

Lord Hague wrote in The Daily Telegraph: “We can now see that it is not necessary to have a two-metre separation between people to keep the virus in retreat where it is already at a low level.

“We know this from the experience of countries such as Denmark, France and Germany where the recommended distance is shorter.

“We should not have to spend weeks agonising over it. Great swathes of our hospitality industry could thus be saved.”

Pubs, bars and restaurants are crying out for the PM to reduce it down to one metre to they can remain viable and stay afloat.

Cutting down the risk from two to one metre would mean ten times extra risk of catching coronavirus, experts have warned.

But other studies show that the difference is marginal.

The British Beer and Pub Association has said keeping the 2 metre rule in place would mean as many as 37,000 pub would have to stay closed.

Denmark cut the rule from 2 metres to 1 metre as cases began to fall, France also halved the two metre rule.

Countries such as Australia which has avoided a widespread outbreak like the UK has had a 1.5metre social distancing rule in place.

The PM has said he wants to cut it when the number of incidents of the virus reduces – which would mean there would be a slimmer chance of catching it anyway.

Lord Hague’s said the Government’s approach of following mathematical models instead of what has worked in other countries needs to be used when looking at quarantine rules.

Travellers coming into the UK need to isolate for 14 days – sparking backlash from the travel industry.

He added: “We also know that these and other European countries are continuing to make progress without quarantining people entering from low-risk countries nearby.

“So the rather belated decision to require everyone arriving in the UK to quarantine themselves for two weeks out soon to be ditched.” Im A Celebrity fans in hysterics as Ian Wright walks in on an unsuspecting...

‘Work from home’ advice will lead to thousands of job losses & businesses going...