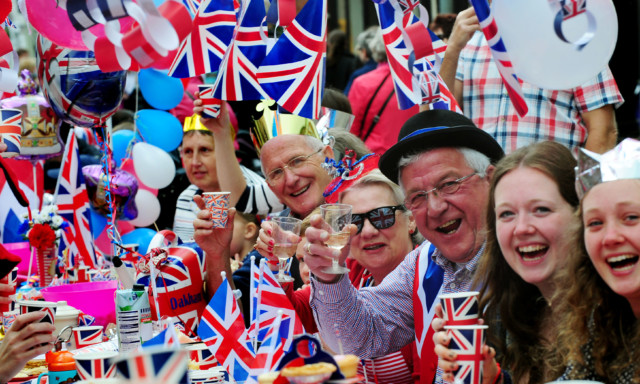 AS Britain comes together to celebrate The Queen’s Platinum Jubilee, killjoy councils are unsurprisingly finding ways to ruin everyone’s fun.

Miserable local authorities will be on the lookout to make sure a jubilant 15 million Brits attending street parties stick to boring rules – and they won’t hold back in dishing out punishments either.

Watch out Britain, your local authorities are watching your every move as you enjoy your street parties this weekCouncils are cracking down on innocent bunting in the run-up to the Jubilee But here at HOAR we have got YOUR back.

And to help, we have compiled a list of SEVEN potential hazards that could get you in trouble, despite their seemingly innocent intentions.

You read that right, bunting could get you in trouble, as residents in Portsmouth, Hampshire found out.

The iconic stringed flags are guaranteed to be at every street and private party celebrating Her Majesty up and down the UK. Panic as experts predict royal popularity will PLUMMET after Queen

But killjoys at Portsmouth City Council today BANNED bunting amid speculation it is too heavy for lampposts.

The council warned, “no bunting is to be strung from telegraph poles”.

It insisted bunting attached elsewhere “must be at least 5.5 metres from the ground and of an easily-breakable nature, so if a fire engine comes through, the bunting doesn’t become a hazard”.

We thought we better flag that one with you.

Residents in Southend-on-Sea, Essex, have been dealt the deflating news that they won’t be allowed to release balloons as they celebrate The Queen’s 70-years on the throne.

In a statement, Southend-on-Sea Borough Council said locals cannot release high flying objects such as helium balloons without the prior written consent of the Council.

Poor souls in the city will also need permission from the Civil Aviation Authority AND the Director of London Southend Airport to let fly a balloon this week.

Undisclosed fines could be hammered on those living near airports if they let off balloons.

DRINKING IN THE STREET

Punters across Scotland could face hefty fines for boozing during street parties for the Queen’s Jubilee with rules varying across the 32 council areas.

In some cases Royal fans can enjoy a tipple without problems, while in other areas strict rules ban public drinking unless temporary licences are in place.

Anyone breaking rules could be hit with fines of up to a whopping £500 with cops insisting they would monitor the celebrations.

Those planning to serve drink or bring their own booze have been urged to check which regulations and by-laws are in force – decided by each council’s licensing committee.

Police or council officers could ask people to stop necking booze if there is a Public Spaces Protection Order under the Anti-Social Behaviour Crime and Policing Act 2014.

Check with the council on this issue as you could face an ulimited fine.

Live music for up to 500 people between 8am and 11pm should be permitted under The Live Music Act, assuming a street is a “workplace”

While a traditional street party will not have any form of entertainment like live music or performances, large bashes will.

There are other exceptions under the Licensing Act with regards to regulated entertainment.

It is therefore advisable to speak to the council before hosting any entertainment to ensure the right permission is attained.

As for popular tombolas, raffles and other social gambling games, there are certain rules which may catch Brits out.

Promoters cannot deduct more than £500 from ticket sales to cover the costs of prizes.

And tickets must only be sold during the event.

Substantial fines can be imposed by local authorities if they catch you breaking the law with public gambling.

A traditional street party must be limited to under 500-guests, according to UK law.

You could face a limitless hefty fine if you do not follow this guidance.

This is for health and safety purposes and the law must be abided by.

You’ll need a Street Party Road Closure Order and no other licence in order to get a street party cleared with the local authority.

But fear not as you won’t be charged for the licence.

You must register to throw a street party if you are on a public road, otherwise, you will get an unwelcome visit from the local authority.

Fifteen million people plan to toast the monarch over the four-day Bank Holiday – but only 16,000 official street party applications have been approved.

Licences for street parties can take between 4-12 weeks to process so it may be too late to get yours registered now.

If you are not registered to throw a street party then you will come face to face with the law and could even face prison.

You may not have time or even be able to get a road closure in your area for a street party.

So you may be able to have an informal Street Meet without needing to ask your council or anyone else. How to tell the difference between chickenpox and monkeypox

A driveway, parking area, or front garden can host these and you won’t need a permit as they are on private land.

The end of a cul-de-sac, wide pavement or grass verge also work well. A traditional street party must be limited to under 500-guests, according to UK law Video games that take the longest time to beat and one takes 693...

Fresh PS5 stock coming TODAY – with modified console that looks like a PlayStation...