FARMERS dyed their sheep red, white and blue in her honour in New Zealand.

In Australia, electricity poles kept crashing down from the weight of people clinging to them for a better view.

And in Jamaica, a man threw his coat over a puddle so the Queen would not have to get her shoes wet, in the spirit of Sir Walter Raleigh — and was promptly arrested for lunacy.

The world had never seen anything like the Queen’s five-and-a-half-month tour of the Commonwealth that began in November 1953.

And it has never seen anything like it again.

It was the first time a reigning sovereign had ever visited many of the countries on the tour, including Australia and New Zealand.

The epic tour was designed to harness the unprecedented popularity of the monarchy in the wake of the young Queen’s coronation just months earlier.

And it was absolutely exhausting — 43,000 miles by land, sea and air, being feted all the way.

She and Prince Philip left Charles, five, and Anne, three, behind because of the gruelling schedule.

They found it “ghastly” to say goodbye.

But it was also the start of an incredible adventure for the 27-year-old Queen and 32-year-old Philip.

He recalled later: “The level of adulation — you wouldn’t believe it.”

First stop on November 24 was a one-night stay in Bermuda, where fights broke out between ­American tourists and local schoolchildren over the best viewing spots.

Next day it was Jamaica, where lady-in-waiting Pamela Mountbatten complained: “The streets of Kingston had been festooned with so much royal bunting, it was impossible to see what anything really looked like.”

Then the couple boarded steamship SS Gothic, which had travelled to meet them carrying eight tonnes of luggage for the rest of the tour.

After passing through the Panama Canal, the ship arrived in Fiji on December 17.

Chieftains came aboard to welcome the royals with a dance, then the Queen sipped on a seashell full of the potent local drink kava, made with pounded roots mixed with spit.

She was thrilled, and said to ­Pamela Mountbatten at the end of it all: “Didn’t you love this!”

Tonga was next, where the Queen was introduced to the oldest resident — a 175-year-old tortoise presented to the country by Captain Cook in 1777.

In Tonga they were warmly welcomed by Queen Salote and later thousands of enthusiastic Tongans.

Queen Salote, who had won British hearts by cheerfully waving from an open carriage in the Coronation Day rain in London, did her best to impress the Head of the Commonwealth with a luncheon feast that included 2,000 pigs, chickens, lobsters and yams, washed down with coconut milk.

But it was the next stop, New Zealand, when things really went crazy.

A cameraman called her arrival on December 23 “like the Second Coming”.

Three quarters of the country’s population saw the Queen during her five-week stay, but she did not get to see enough of those she was most ­interested in — the Maori people.

Again and again, white dignitaries hogged the sovereign’s time and refused to allow traditional ceremonies to go ahead.

Lady Pamela revealed: “We were so disappointed.”

From Auckland, Her Majesty delivered her annual Christmas Speech by radio to the Commonwealth, saying of her tour: “I want to show that the Crown is not merely an abstract symbol of our unity, but a personal bond between you and me.”

After a few days’ rest at sea, the royals steamed into Sydney Harbour on the morning of February 3, 1954.

Half a million people out of a population of 1.8million turned out on the shores to watch them arrive.

Tens of thousands had slept outside to secure the best spots, and locals said the night had been lit up by the glow of campers’ cigarettes.

One Boer War veteran, who had waited five hours for a glimpse, told a newspaper: “God bless her, I fought for her great-great grandmother Queen Vicky.”

In all, as in New Zealand, three quarters of Australia’s population would see her during a two-month stay that saw her criss-cross the ­country by road, rail and air.

It was the height of summer, and a young Clive James recalled waiting in the heat to see the royals with his schoolmates “fainting left and right, as if their serried ranks were subject to sniper fire”.

But the Queen never even broke into a sweat. Lady Pamela explained that the Queen simply did not perspire, adding: “That means she can’t get relief, so she suffers twice as much from the heat.

“She says no perspiration makes it much worse.”

But the Queen only had thoughts for those who came to see her.

Lady Pamela explained: “She was very meticulous in the motorcades that the car should go slowly enough for people to get a proper view.

She used to say, ‘What’s the point in coming unless they can see me?’ ”

Often they were going so slowly that the Queen could overhear what people were saying, which was often that she looked fed up.

She told a staffer: “It’s awful. I’ve got the kind of face that if I’m not smiling, I look cross.

“But I’m not cross. If you try to smile for two hours continuously it gives you a nervous tic.”

However, the epic tour took its toll. 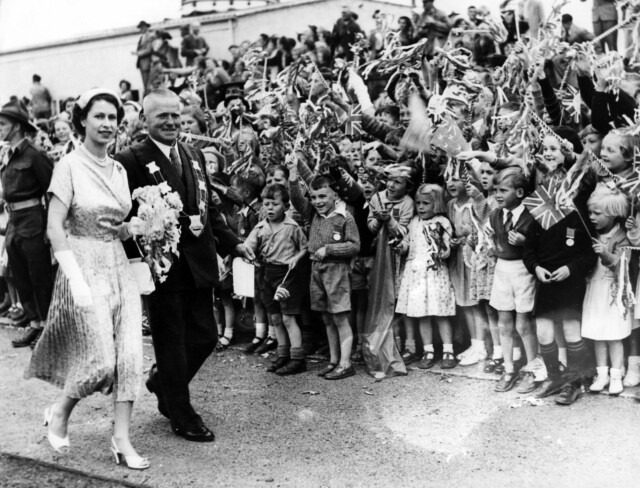 The Queen wanted to build a personal connection with Commonwealth nations

And during a few days’ rest in a chalet outside Melbourne, a camera crew waiting outside were startled when Philip burst out of the door with a pair of tennis shoes and a racquet flying after him.

The Queen then emerged, shouting at him to come back, and dragged him inside.

The entire scene was caught on film, but a courtier charged out “angrier than a wounded buffalo” and ordered the cameraman to hand over the footage.

Next out was the Queen, now all serene.

She said: “I’m sorry for that little interlude, but as you know it happens in every marriage.”

The royals finally steamed out from a harbour near Perth, bound across the Indian Ocean for a brief stop at the Cocos (Keeling) Islands.

Then it was on to Ceylon — now Sri Lanka — where the glass beads on the Queen’s dress got so hot in the sun they could not be touched.

A quick pause followed in Aden, now part of Yemen, then two nights in Uganda, where the Queen opened a new dam on Lake Victoria, ­sending water crashing down into the White Nile.

From there, they flew to Tobruk in Libya, where Prince Charles and Princess Anne were waiting.

The youngsters had travelled aboard the Britannia on her maiden voyage, and the new ship then took them all to Malta for a few days.

Then finally they all sailed home to London, where on May 15 a banner on Tower Bridge greeted them with the words: “Welcome Home”.

Tens of thousands of people lined the banks of the Thames.

Their Queen was home, and her reign as British monarch and Head of the Commonwealth family of nations could begin in earnest. 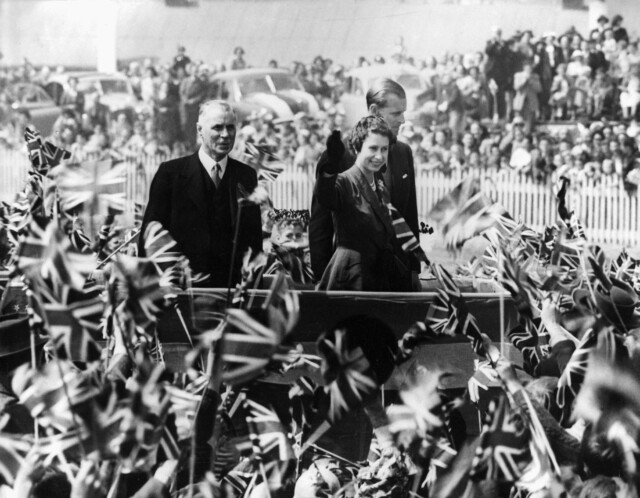 Millions to get £300 cost of living payment direct to bank accounts from today...

I’m A Celebrity fans all saying the same thing about Seann Walsh as controversial...