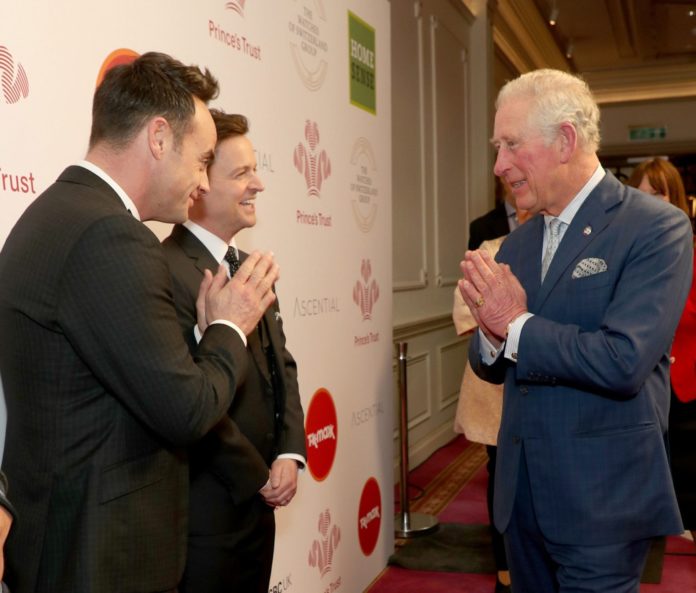 PRINCE Charles and TV presenters Ant and Dec skipped the usual royal protocol of a handshake and instead used the Namaste greeting as the UK continues to be confronted with the coronavirus crisis.

The three men placed their hands in the prayer sign and bowed their heads in greeting, also known as Pranamasana, a customary Indian greeting, as they met at the 2020 Prince’s Trust Awards.

The three skipped the usual protocol

“So perhaps it is a little bit refreshing for them to be handing out awards rather than receiving them for a change.”

The event, taking place at the London Palladium was to honour and recognise young people who succeeded against the odds, and the Prince thanked international supporters of his trust who were unable to attend due to the spread of Covid-19.

“Due to circumstances beyond our control we are not joined by as many of those who make such an immense difference to my trust internationally, as we originally planned,” he shared.

The pair later joked around on stage about shaking hands

He continued: “However, I just wanted to thank them for all their continued support and dedication to my trust.”

Earlier on the red carpet, the 71-year-old met Dame Martina Milburn, chief executive of the trust, and John Booth, its chairman, and recalled his hand in mock horror after extending it forward for a handshake.

“It’s just so hard to remember not to,” he joked with the pair.

Ant and Dec have known the prince for a long time

Ant and Dec were named OBE’s World Health Organisation officials are now warning national governments its time for aggressive action as the outbreak was finally declared a pandemic.

There are now more than 118,000 cases in 114 countries and 4,291 deaths, but it is thought this could just be the beginning of a devastating crisis.

It comes as UK coronavirus cases rise to 460 and the UK death toll hits eight.

NHS will get ‘whatever it needs’ to fight coronavirus