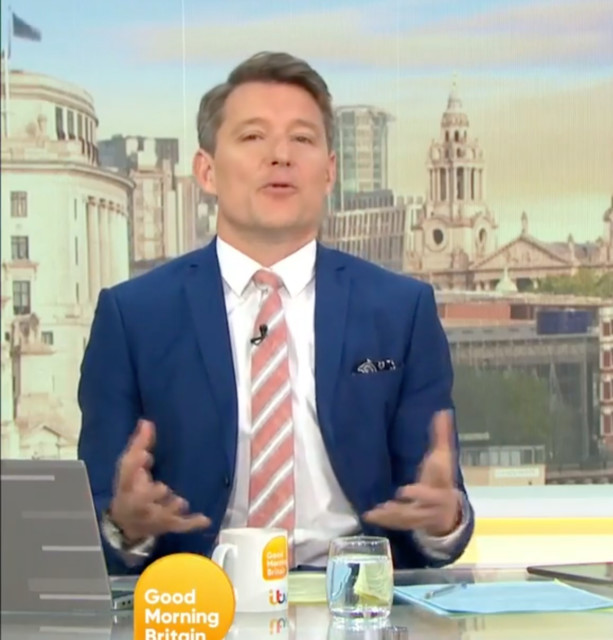 BEN Shephard has criticised Prince Harry for slamming his dad weeks after Prince Charles buried his own father.

The Good Morning Britain presenter didn’t hold back as he questioned why the Duke of Sussex, 36, had yet again spoken out against the Royal Family after quitting the UK over lack of privacy.

In a discussion about his comments during a sweary podcast chat, Prince Harry described royal life as a mixture of The Truman Show film and being in a zoo.

He also blasted dad Charles’s parenting and said he moved to California to “break the cycle” of pain for wife Meghan and their kids.

Harry claimed his dad, 72, “suffered” due to his upbringing by the Queen and Philip, then “treated me the way he was treated”.

Ben’s co-host Kate Garraway said on today’s GMB: “I wonder what it will be like to talk to him in five years’ time.”

“And look back and think about what’s done,” intercepted Ben.

“When you start with ‘I don’t want to point the finger’, and then immediately points the finger.”

The frustrated presenter added: “We’ve all been there as young parents, you think you’re going to take the best bits of your parents and then you get down the line ten or 15 years later and you say ‘I can see why you did the best you did and have more respect and understanding.’

“When did he become an expert? He’s been a parent for five minutes. What is he doing talking about being a parent?

“That’s what I find really difficult. The one thing about Harry was he just felt so normal and down to earth. Something has happened…

“His father buried his own father just a few weeks ago. You can’t imagine just how impossibly difficult that has been for the whole family.”

The Duke opened up about his mental health struggles in a brutally frank, and profanity-laden, chat with US podcast host Dax Shepard.

Only weeks after telling Oprah Winfrey in a bombshell interview that his dad was “trapped”, Harry again opened up about their father-son relationship.

He said on the “Armchair Expert” podcast: “I verbalise it, which is, ‘Isn’t life about breaking the cycle’?

“There’s no blame, I don’t think we should be pointing the finger or blaming anybody.

“But certainly when it comes to parenting, if I have experienced some form of pain or suffering because of the pain or suffering perhaps my father or my parents suffered, I’m gonna make sure that I break that cycle so that I don’t pass it on, basically.

“There is a lot of genetic pain and suffering that gets passed on ­anyway. As parents we should be doing the most that we can to say, ‘You know what, that happened to me, I’m gonna make sure that’s not going to happen to you’.”

Reacting to Harry’s comments, Ben continued: “There is more in there as well though. He does talk about life as a Royal and how it felt like being in The Truman Show, like being in a zoo and all those things.

“He’s being asked questions and speaking very honestly and openly, but those answers land very difficultly at a time when the world is going through a global pandemic and there are impossible restrictions being put on everybody.”

Kate cut in saying: “And money worries, fears for their future because of loved ones or their own lives. It all lands in a different way that I suspect he doesn’t intend in any way, but it’s out there now.”

Love Islands Connor brands Connagh a snake after he steals Sophie from him as...

Is there a feud between Prince William and Harry?