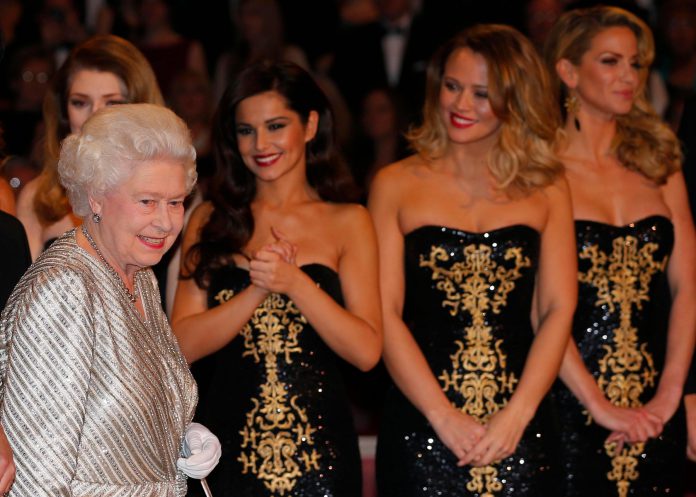 CHERYL described the Queen as so delicate after meeting
her at the Royal Varity Show in 2012.

The singer joined her former girl group Girls Aloud, where
they performed their hit single The Promise to members of the royal family.

After their performance the group assembled backstage
alongside other acts in the show where they were greeted by the monarch.

And it seems that Cheryl, 36, was particularly taken with
the Queen, 93, taking to Twitter after their meeting to praise Her Majesty.

She wrote: The Queen is so delicate. She has hair like
candy floss and tiny little dancing style shoes .. Awww (sic).

The pair has actually met earlier on that same year when the
Geordie singer was seen stood next to the Queen during her Diamond Jubilee
concert, but denied making a beeline for the spot.

She tweeted this after their introduction

Cheryl said at the time: I did not know I was on camera
until I came off stage.

They stood us in line and then they brought the Queen out,
but she wanted to stand next to me.

It was that same year that Cheryl first met Prince Charles,
with whom she has since on several occasions over the years through her
philanthropic work.

Speaking to The Telegraph Magazine, Cheryl said she has
warm memories of an early meeting in July 2012 when she joined Charles for
tea at Clarence House.

But she forgot to abide by royal protocol, revealing: I
totally forgot to address him officially, just called him Charles.

Someone started coughing loudly behind me, which he just
found very funny.

The pair went on to discuss Harrys love for hip-hop which would bang through the ceiling at home. He also remarked on her elaborate collection of tattoos.

In other royal news, we revealed the Queen is a big fan of Kate Middleton’s ‘unflappable’ attitude.

We also revealed the Queen wanted the royal children to be seated in a different room for Christmas lunch, claims royal biographer.

In other royal news, we told you how Kate Middleton has always wanted her children to live in the real world, reveals royal expert.

Families could have a chance for normal Christmas this year despite Covid, minister says

Get your home on the market by September 26 to beat the stamp duty...