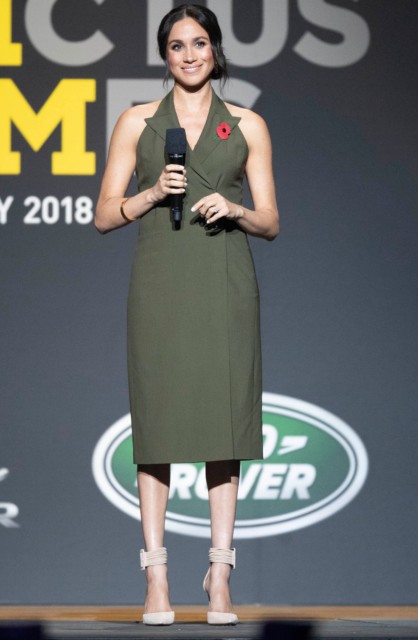 SHE’S been an actress and member of the Royal family – and now it has been claimed Meghan Markle has her eyes set on politics.

A senior member of the Labour party has told a newspaper the 39-year-old wants to climb the ranks in US politics with a view of standing as a Democrat in 2024 when current president Joe Biden will be 82.

Meghan is no stranger to public speaking

The Mail on Sunday reported she was preparing a bid to become America’s first female president following the failed bid of Hilary Clinton several years ago.

The Labour member, who the Mail said was from Tony Blair’s administration and with strong links to Washington DC, claimed Meghan was currently networking among senior Democrats.

They said she had a view of fundraising for president, adding: “The Blairite, internationalist and Democratic party networks are buzzing with talk about Meghan’s political ambitions and potential backers.”

If Meghan did succeed she would be the US’ first ever female president and only the second ever non-white president after Barack Obama. There are claims she wants to be president

But she wouldn’t be the only person to have made the jump from actor to president with Ronald Reagan working in Hollywood for 40 years before taking up office.

Historically Meghan, who has a number of friends in political circles, has been vocal about the importance of democracy.

Before becoming involved with Harry and the Royals, Meghan attacked Trump dubbing him “misogynistic” and “divisive”. And a few years ago, rumours circulated that Meghan had once confided in a friend that her ultimate goal was to become President. According to sources, she admitted the ambitious goal after beginning her relationship with Harry.

And in 2015, she reportedly told Piers Morgan: “As a kid, I wanted to be either the president or a news broadcaster like you”.

Former editor of The Times, Sir Simon Jenkins has said: “Her friends and associates affirm that she is a political animal. Such is her fame, she could perfectly well follow a route taken by a certain Ronald Reagan.

But the Mail of Sunday says, even though Meghan’s involvement in politics could be problematic.

It is likely she would have to renounce her Royal title if she wanted to hold public office as it would because it cross the US oath of allegiance.

Fabulous has contacted the Sussexes’ spokesman for a comment. She would be the first female president of the US, should she succeed, following the failed bid of Hilary Clinton

And Meghan was accused of taking inspiration from Wallis Simpson with centre-parted hair & floral dress by Oprah viewers.

Kate Middleton steps up to the plate working non-stop after Meghan Markle and Prince...

Im A Celebrity viewers slam James Haskell as he reveals he refused to tell...

The Queen rarely leaves the palace without her pearls as they were a gift...