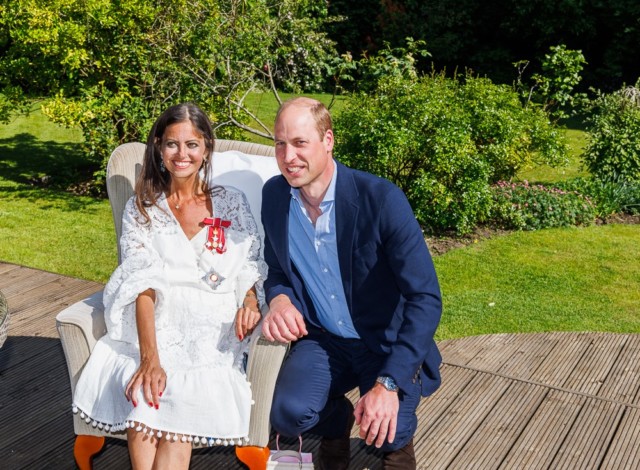 The Duke and Duchess of Cambridge added they were sad to hear of her passing and said that her legacy will live on. Deborah died yesterday aged 40. She beat eight per cent chances of living for five years after her bowel cancer diagnosis in 2016.

Prince William and Kate Middleton tweeted this morning: “We are so sad to hear the heartbreaking news about Dame Deborah.

“Our thoughts are with her children, her family and her loved ones. Deborah was an inspirational and unfalteringly brave woman whose legacy will live on.”

Last month she was honoured with a Damehood after capturing the nation’s heart with her honest accounts of living with the disease. And Prince William travelled to her parents’ home, where she was staying, to present the award to her.

He later revealed that he loved meeting the cancer campaigner, adding that it felt like a “very personal family moment”.

Deborah’s heartbroken family revealed the inspirational Sun columnist died yesterday surrounded by her loved ones – sparking a flurry of tributes.

Boris Johnson said he was “terribly saddened” by the news of Dame Deborah’s passing.

The PM wrote: “What an inspiration she was to so many.

“The awareness she brought to bowel cancer and the research her campaigning has funded will be her enduring legacy. Because of her, many many lives will be saved.”

“Dame Deborah James’ charity work was truly inspirational — even in the most challenging moments, she continued to raise awareness about bowel cancer and impacted so many people’s lives.

“Our thoughts are with her family and friends at this difficult time.

Piers Morgan described her as “a truly remarkable and inspiring woman” adding it was “such sad news”.

NHS Chief Executive, Amanda Pritchard, said: “On behalf of the whole NHS I would like to offer my condolences to the family and many friends of Deborah James.

“Deborah’s amazing attitude was humbling and a lesson to us all.

“Not only will her fundraising have helped countless other cancer patients but her determination to raise awareness will undoubtedly have saved many lives.”

And ITV presenter Charlotte Hawkins tweeted: “Oh no, heartbreaking news that @bowelbabe has left us. What an inspiration, a truly special person who saved lives & did so much to help others.

“Who showed that even a terminal diagnosis wasn’t going to stop her living life to the full. So much love to her family and friends.”

Carol Vorderman paid tribute in a tweet, saying: “Your incredible spirit will live on”.

“An absolutely extraordinary campaigner. Thank you for your rebellious hope and the millions you have inspired @bowelbabe.

“Thinking of your many loved ones.”

After learning last month she would receive end-of-life hospice care, Deborah began fundraising in earnest – with the total now topping an astonishing £6.7million.

It reads: “We are deeply saddened to announce the death of Dame Deborah James; the most amazing wife, daughter, sister, mummy. Deborah passed away peacefully today, surrounded by her family.

“Deborah, who many of you will know as Bowelbabe, was an inspiration and we are incredibly proud of her and her work and commitment to charitable campaigning, fundraising and her endless efforts to raise awareness of cancer that touched so many lives.

“Deborah shared her experience with the world to raise awareness, break down barriers, challenge taboos and change the conversation around cancer. Even in her most challenging moments, her determination to raise money and awareness was inspiring.

“We thank you for giving us time in private as a family, and we look forward to continuing Deborah’s legacy long into the future through the @bowelbabefund

“Thank you for playing your part in her journey, you are all incredible.”

True to form, the beloved national treasure had the last word.

She penned a final missive to supporters before her death. Her words were shared in the Instagram post tonight.

“Find a life worth enjoying; take risks; love deeply; have no regrets; and always, always have rebellious hope,” she said.

“And finally, check your poo – it could just save your life.”

Despite being told she had an eight per cent chance of living five years, Deborah defied the odds stacked against her.

After celebrating her 40th birthday last October – a birthday she never dreamed she would live to see – the brave campaigner marked the five-year milestone a few months later.

Deborah shared every step of her journey with Sun readers in her column Things Cancer Made Me Say and her army of loyal social media followers. She went on to present the award-winning BBC podcast You, Me and the Big C with fellow cancer patients Rachael Bland, who passed away in September 2018, Lauren Mahon and Rachael’s husband Steve.

In the five-and-a-half years since her diagnosis Deborah changed the conversation around bowel cancer, raising vital awareness and breaking down taboos.

Love Island’s Paige Turley is all smiles in double denim as she visits London...

Labour ahead of Tories on law and order among ‘wobbling voters’, shock poll reveals