ROYAL fans have been given a sneak peak at Kate Middleton’s star-studded carol service, which will air on Christmas Eve.

The Duchess of Cambridge, 39, looks glowing as she hosts the festive event, and is even wearing a Christmas jumper for the occasion. 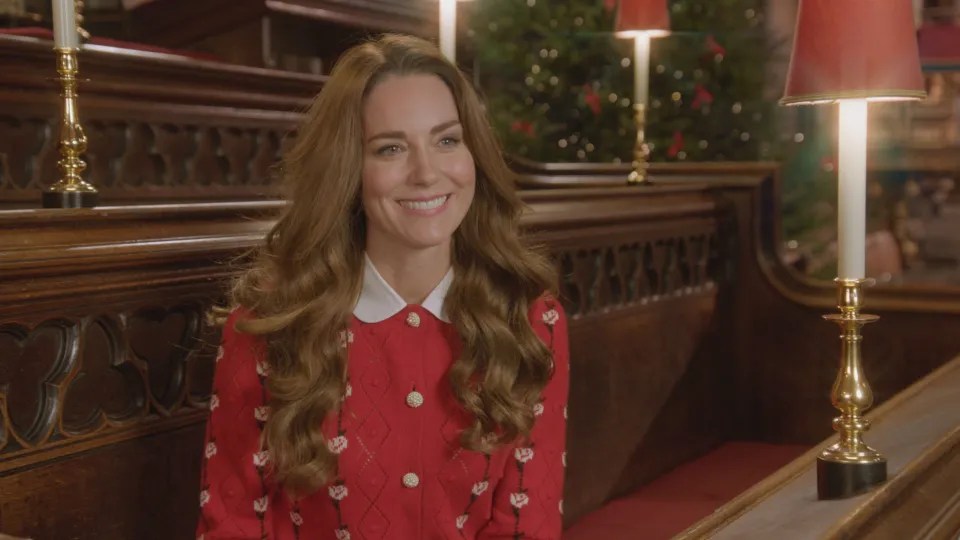 Kate Middleton glows in a first look at Royal Carols: Together At Christmas, which will air on ITV on Christmas Eve 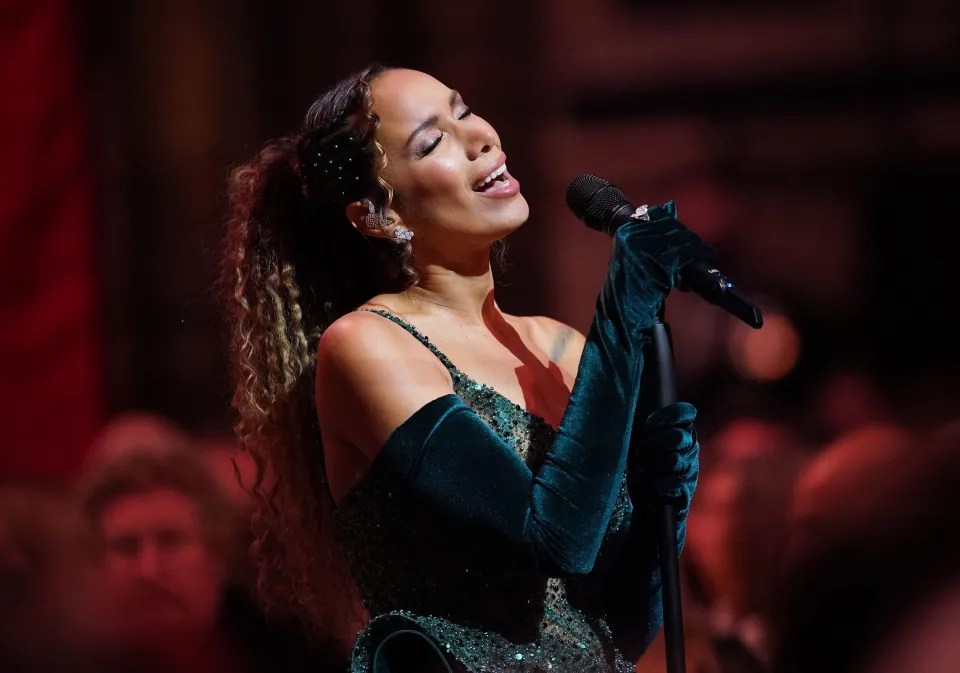 The carol service features a host of famous faces, including Leona Lewis performing 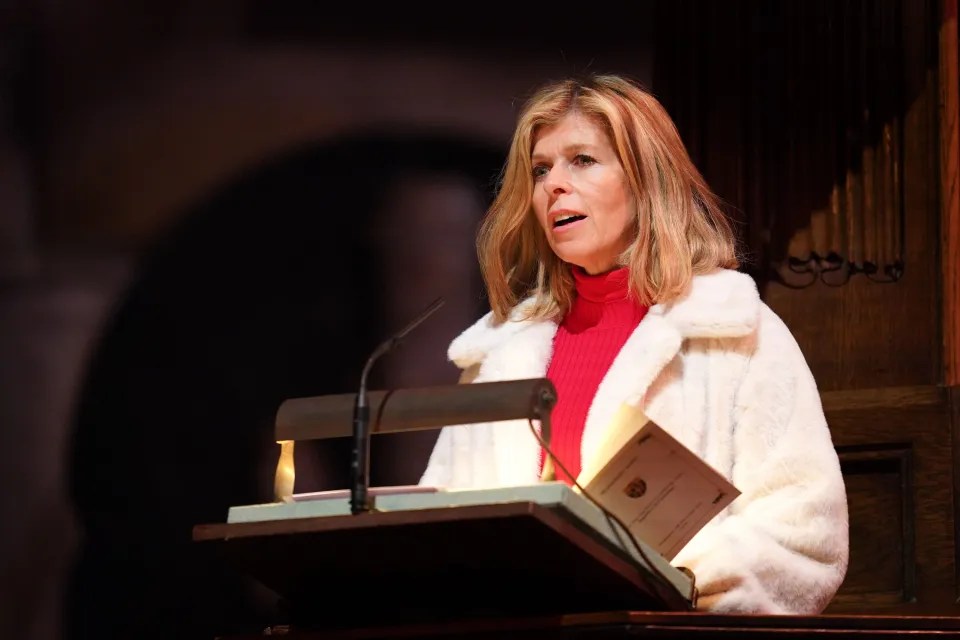 Kate Garraway taking part in Royal Carols – Together At Christmas

In a clip released by ITV today, Kate looks radiant in red as she says: “I am so excited to be hosting Together At Christmas here at Westminster Abbey.”

The short promotional teaser, voiced by actor James McAvoy, shows a host of A-list stars performing for the royal service.

He says: “Join Her Royal Highness The Duchess of Cambridge, with special guests and music performances.”

Royal Carols: Together At Christmas, which will air on December 24 at 7.30pm on ITV, will also include a whole host of festive performances, readings and carols introduced by The Duchess of Cambridge.

The service was filmed on December 8, and Kate was seen wowing in a festive Catherine Walker coat with large bow detail, a red dress, and the Queen Mother’s sapphire fringe earrings loaned to her by the Queen.

The Duke and Duchess of Cambridge were greeted by carol-singing school children and reindeers outside Westminster Abbey in London.

The show was switched from the BBC at the last minute following a row over the BBC Two’s The Princes And The Press, which examined William and Harry’s relationship with the media.

She gave the duchess a twirl in her green, sequin dress before taking her seat behind the royals.

Mila gave a reading and said afterwards: “I showed her my dress and she said I looked lovely.”

Mum Lynda, from Falkirk, said: “We are just an ordinary family. It is amazing to be invited.”

Kate and Wills, both 39, also welcomed Tony Hudgell, seven, who had both legs amputated after being abused by his birth parents.

Tony, of Kings Hill, Kent, recently helped force a law change to get life in jail for child abusers.

The Together At Christmas concert reflects on the challenges of the pandemic and will pay tribute to the people and organisations who have supported communities through the Covid-19 crisis.

In a moving message, the duchess told the programme the pandemic showed the “importance of simply being together” – as she described the “heart-wrenching isolation from those we hold most dear”.

Kate said: “We have lost loved ones, seen our frontline workers placed under immeasurable pressure, and we have experienced heart-wrenching isolation from those we hold most dear.

“Alongside this, we have seen how communities have come together to support those most in need.

“And through our separation from others, we have been reminded just how powerful human connection is to us all.

“Just how much we need one another. And how loving and feeling a sense of belonging to one another can provide comfort in tough times.

“The importance of simply being together.”

Kate also wrote: “Christmas is a time when we can reflect on the past, listen to one another, focus on the relationships that nurture us and build our resilience, so we can look forward to a brighter shared future.”

The royal couple also said hello to a pair of reindeers, with brave Kate treating one of the Christmassy creatures to a few pats on the head.

Kensington Palace said: “Unsung heroes from across the length and breadth of the nation have been invited to attend the service in recognition of their tireless efforts and selfless acts of kindness despite incredibly difficult circumstances.”

The service has been developed and delivered in partnership with the Abbey and BBC Studios Events Productions. Royal Carols: Together At Christmas was filmed in Westminster Abbey on December 8 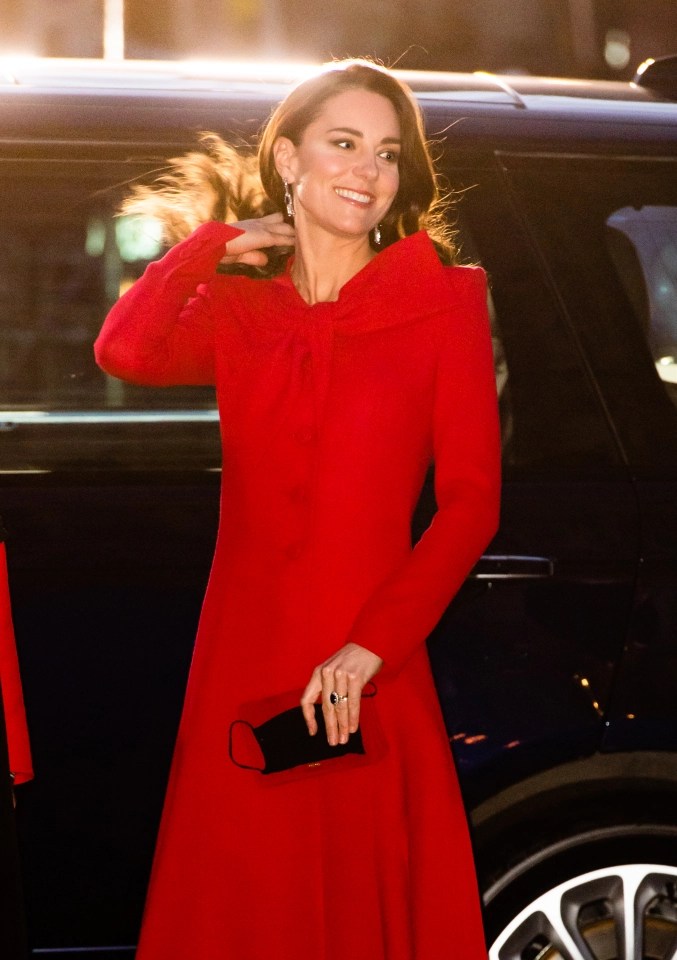 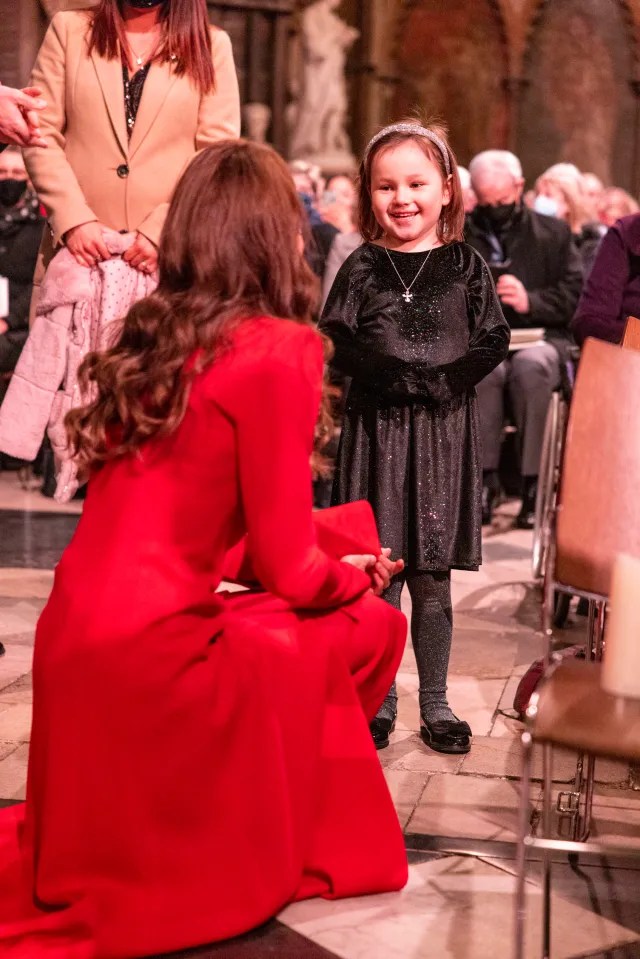 Kate talks to Mila Sneddon, 6, ahead of the Together At Christmas community carol service 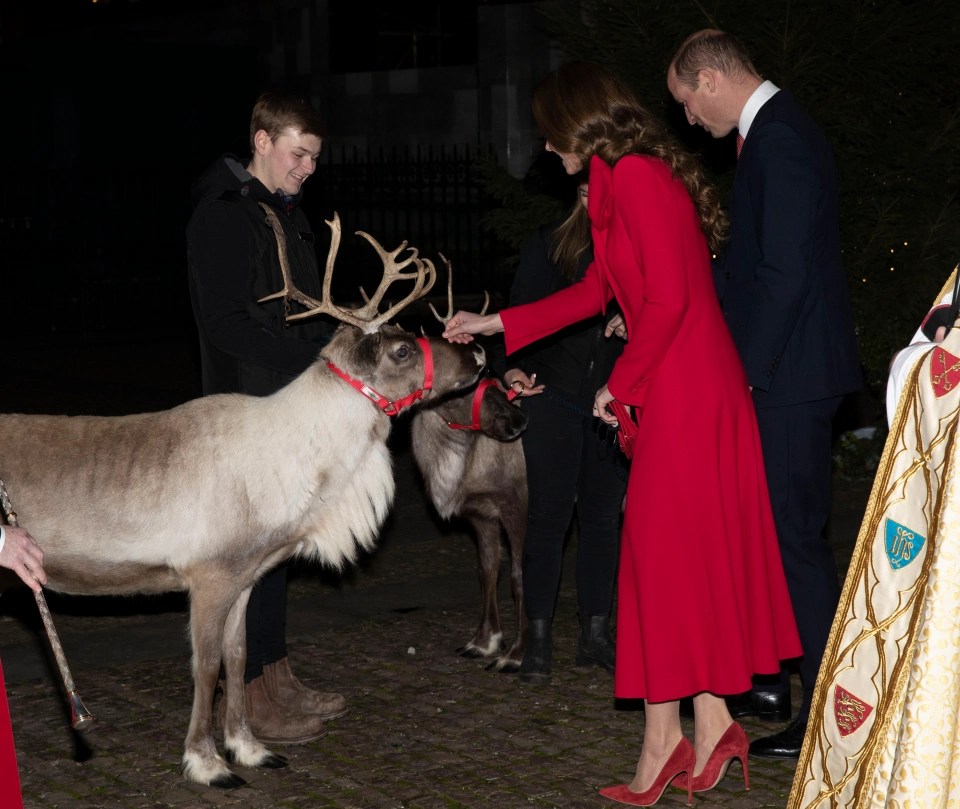 The royal couple also said hello to a pair of reindeers, with brave Kate treating one of the Christmassy creatures to a few pats on the head

But it will be broadcast on ITV after a controversial documentary about Harry and William was aired.

We shared how Kate, Prince William and Charles ‘cancel all Christmas plans to spend time with Queen’ as Omicron surges.

In other royal news, we revealed how Kate has a VERY relatable evening routine with Prince William – and mums everywhere will be totally on board.

Meghan Markle and Prince Harry say they stand with Ukrainians as they accept NAACP...

Nicola Sturgeon tells Scots NOT to book holidays and threatens to ‘go further’ on...