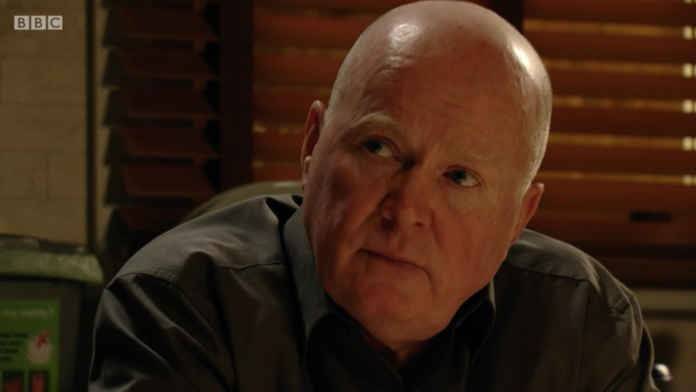 The former landlord of the pub – who is played by actor Steve McFadden in the BBC soap – found out the pub was for sale after telling Shirley Carter how he planned to win Sharon back.

Owners Mick and Linda are selling due to Linda’s alcoholism making it too difficult for her to remain there.

Phil told Shirley: “I’m hoping to get back with Sharon if I can put the past behind us.

“It’s what I want, what I need really. That and sorting Ben out. I need to get my family back together.”

Shirley told him: “Well if Sharon’s what you’re after then I have it on very good authority that the Vic’s going to be up for sale. And Sharon, well, she loves that place.” Shirley told him the happy news

Phil looked intrigued at the idea and it was clear he was thinking of buying it.

Fans have been convinced for weeks that either Sharon or Phil would end up back in the pub – though they are split on whether Sharon has truly forgiven Phil, or whether she’s pretending to get her hands on the pub.

One wrote: “I think Sharon is playing Phil, she’s gonna take his money and use him to buy the Vic for her. #Eastenders @bbceastenders”

A second said: “Is Sharon using Phil for money for the Queen vic? #Eastenders”

Another added: “Phil and Sharon belong together. And it looks like they will own the Vic next. Love it! #EastEnders”

* EastEnders airs Monday and Tuesday nights on BBC One

Meghan Markle latest news – Queen was MANIPULATED and taken advantage of by Prince...