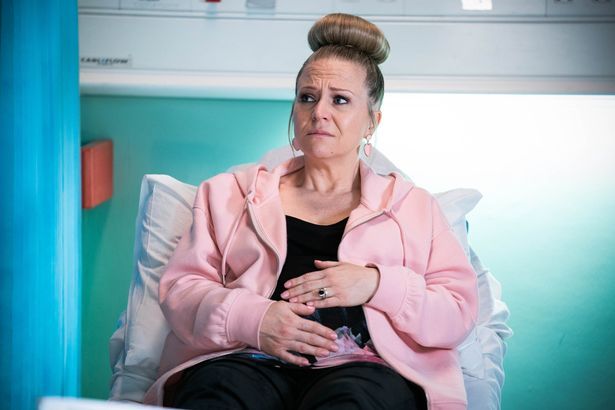 The Queen Vic landlady – who is played by actress Kellie Bright in the BBC soap – went into labour on Tuesday night and welcomed a baby girl.

Viewers know the baby’s father is Max Branning – but Linda and husband Mick are pretending she is his.

However that may become more difficult with the baby being born ginger – just like her dad Max.

And when they revealed the new addition’s name – fans went wild.

Mick Carter was talking to his mum Shirley when he revealed the name.

He told her: “Be straight with me. I know you’ve got form – did you start the fire?”

Shirley admitted: “I am sick of him making a mug out of me.”

But as Shirley became emotional, Mick cut her off saying: “Anyway, Annie wants a cuddle from her fire-starting, drug dealing Nan!”

Fans love the nod to Linda’s love of musical theatre with Annie’s name.

One wrote: “Annie Carter. It has a nice ring to it and Linda does love her musicals.

“She has a Nancy and an Oliver. Now she has an Annie!”

A second said: “Annie! That’s not an Oliver Twist name but she’s right, it’s from a musical!”

Another added: “So the baby could have red hair and they call her Annie.

“It’s a lovely name but that feels like an omen!”

A fourth said: “Wait, what? Is she called Annie because she’s a ginger?”

Mick will pretend the baby is his

Bolton could be hit by RIOTS if ministers try to impose new local lockdown...

PS5 UK stock LIVE – GAME and Argos both have Playstation consoles in stock...