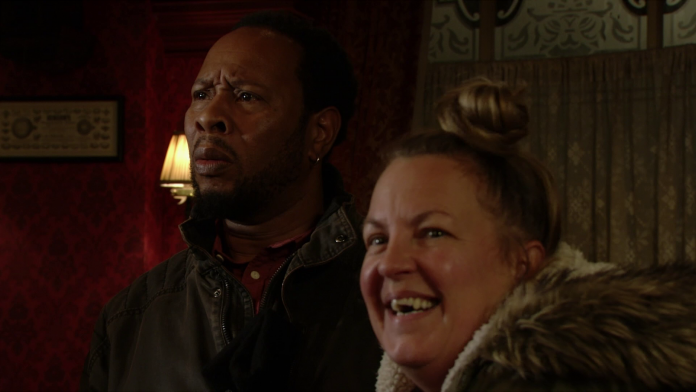 EASTENDERS viewers were in hysterics tonight as it emerged the secret ingredient in Mitch Baker’s latest gin was Karen Taylor’s naked body.

Friday’s comedy storyline saw her strip off and take a dip in the brew – somehow believing it was bathwater – before it was bottled and served in the Queen Vic.

Learning that she’d climbed in hoping to do her bit for the environment, Mitch boggled: “How could you not know it was gin?”

But it was too late and the drink was already being hailed as the next big thing at the Vic, with Mick Carter declaring: “I’ve tried that gin – and I love it.

Mick replied: “Yeah, not just me, the whole pub has. Done a bit of a taste test.”

Shirley, sitting groggily on the other side of the room, chipped in: “It’s not vodka, but it’s doing something to me.”

Mick asked: “What’s the secret? How do you get it so sophisticated?”

While Mitch stood by the bar looking like he was about to throw up, Karen said: “I think you should try some yourself.

“Enjoy the fruits of your labour. Let those special ingredients trickle over your tongue.”

Of course, he refused – and when Mick asked for more, Mitch snapped: “It’s gone, we’ve sold it all. It’s was a one batch.”

Fans were loving the confusion, with one writing: “So half the square have drunk gin that had marinated in Karen’s armpits etc.”

Another added: “This is the best! #Gin #MicksGin My girls skin must be sweet as hell.”

A third tweeted: “@bbceastenders the fact karen has been bathing in gin cracked me up! what a legend!