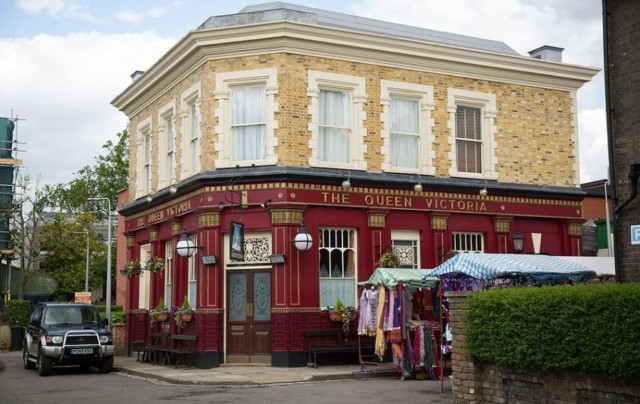 EASTENDERS’ Queen Vic is getting a beer garden for the first time to reflect real life post-lockdown.

Landlord Mick Carter is set to struggle to keep an eye on his rowdy punters outside the four walls of the famous boozer when the show returns to screens in September.

EastEnders is currently off air because it ran out of episodes during lockdown but it will be with a new look and storylines that cover the pandemic.

And with drinkers reluctant to pile into crowded pubs because the risk of spreading Covid-19 is lower outside than inside, it was decided the famous boozer should get an upgrade.

Aerial photos show the new outdoor feature across the road from the pub, with pink umbrellas and tables dotted around the famous Square garden.

The pics also reveal EastEnders is keeping up with the times, with a Black Lives Matter mural painted on a wall behind stalls at Walford market. They unveiled the eye-catching anti-racism mural that will become a permanent feature earlier this month.

The stunning art features a black woman, and was painted directly onto Ian Beale’s side wall on Bridge Street – opposite the Queen Vic pub – over several days by Dreph.

It measures an impressive 5×2 metres, and was completed ahead of the cast and crew returning to work today [Monday 29th]. Actors are back at work on set

Producers have promised that the mural will be a backdrop to many storylines in the coming weeks.

It was previously thought The Queen Victoria could be under threat of closure – for the first time in ten years.

One potential storyline was to close the pub in order to reflect social distancing measures. Fans feared the pub could be closed down

Although the pub has apparently been open on Albert Square since the soap began in 1985, it was previously forced to close for refurbishment in 2010, when Phil Mitchell burned it to the ground while coming down from crack cocaine.

On-screen Mick and Linda Carter are currently selling the pub – with Phil and Sharon desperate to buy it, meaning its future is up in the air.

EastEnders filmed it’s final scenes before the coronavirus shutdown on 18 March, with actors returning to work earlier this month.

Did you miss our previous article…
https://www.hellofaread.com/royal/beatrice-will-be-a-doting-stepmum-to-edoardos-son-4-says-friend-after-wolfie-was-best-man-at-her-wedding/

Upcycle your bottles and old recycling to create class in a glass with home-made...

Sir Keir Starmer turns down Indian takeaway and San Miguel from The Sun after...