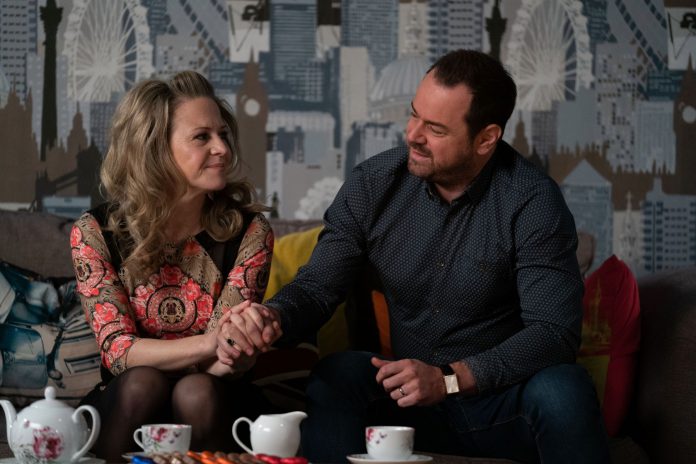 EASTENDERS’ Mick Carter is desperately going to try and save what’s left of his marriage to Linda.

The Queen Vic landlord – who is played by actor Danny Dyer in the BBC soap – is being pushed to breaking point by alcoholic Linda’s behaviour and next week he will launch a last ditch attempt to save her.

Can the Carters save their marriage?

When a social worker visits to check on Ollie, knowing how Linda’s drinking has affected him, the couple try to put on a united front.

However when Loretta the social worker quizzes them and Linda begins secretly putting gin in her tea to cope.

Linda seems to just about hold it together in front of her, but once she’s out of earshot she drops her act.

Watching from afar a seething Linda watches Mick have a quiet word with Loretta and becomes paranoid.

She berates Mick for talking to Loretta about her and no matter what he says, she insists on going after her to put her straight.

But by now Linda is drunk and by the time she catches up to her she’s sozzled and it shows.

Meanwhile, Tina checks Mick is okay and questions if Ollie is safe around Linda leaving him conflicted.

Linda soon arrives home and Mick is distraught to learn what Linda has done, leaving her ashamed at herself for messing everything up.

Mick regrets admitting to Linda that Ollie might be better off without her, but before he can apologise Linda storms out.

She confides in Sharon while Mick gets lesson from Jean Slater and decides that he has to save his marriage to Lind, but will it all be too late?

Emmerdale: Why did Faith Dingle leave?

Meghan Markle was behind Megxit as she’s in ‘driving seat’ of her and Prince...