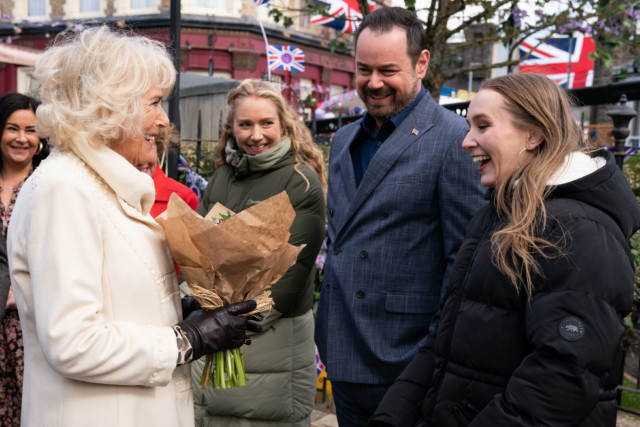 EASTENDERS star Danny Dyer has hinted to the Duchess of Cornwall that he may return to the soap despite quitting.

The actor – who plays Queen Vic landlord Mick Carter in the BBC soap – will bow out later this year in an explosive storyline.

Danny Dyer has hinted he will return to EastEnders after quitting

But this week during a Royal visit from The Prince of Wales and the Duchess of Cornwall, Danny let slip that it may not be a permanent exit.

He told Camilla that he will be exiting the show after nine years.

“I used to make movies before moving into soap-land, but I’m leaving this year… Maybe I will come back, who knows,” he said.

Camilla asked Dyer about his exit storyline, to which he said: “Tune in, it’s going to be a big one.” Later, Dyer admitted he did not speak to Charles about his Who Do You Think You Are episode, which found he was related to royalty.

He said: “It just don’t go down well does it? I don’t think they’d believe me. I met Charles before and I dropped it in, he just looked at me strange but I suppose we are related.

“Very random to see the Royals, you know, up close they were very charming, really chatty, they’ve got mad faces when you’re close.

“So excited to have them here, meet them and introduce them to the Square.”

Danny announced he was leaving the soap earlier this year.

His exit is due to play out over the summer.

First Moderna vaccine dose given in UK as unpaid carer, 24, gets coronavirus jab...