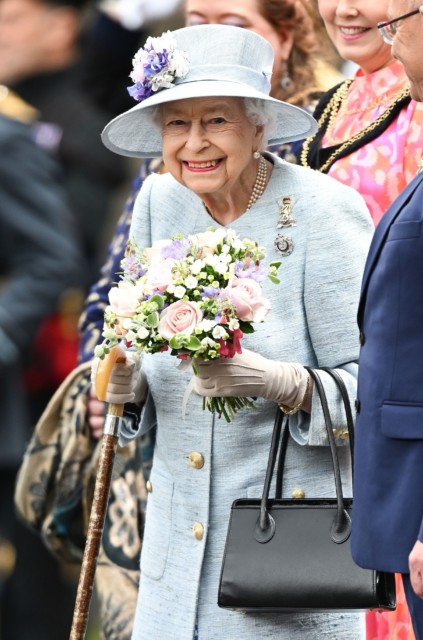 THE Queen beamed as she stood without using her trusty stick — just hours after walking unaided to catch the Royal Train for a stay in Scotland.

Her Majesty, 96, looked relaxed yesterday at the start of the Royal Family’s Holyrood Week, showing no sign of the discomfort that has blighted her for nine months.

Clutching a bouquet, she smiled happily at the Ceremony of the Keys in Edinburgh, at which she is symbolically offered the city’s keys by the Lord Provost.

Her Maj, who wore the Royal Regiment of Scotland badge on her powder blue silk dress, received them from Lord Provost Robert Aldridge.

She was joined by her youngest son, Prince Edward, 58, and his wife, Sophie, 57, in what was her first public appearance since her Platinum Jubilee long weekend.

Just the night before, the monarch was spotted boarding the train at Windsor and Eton Riverside Station with no help from aides.

Read more on the Queen Local cricketer Chris Dixon, 24, briefly filmed the Queen on his mobile at 9.50pm.

The footage shows Her Maj walking comfortably with her stick in her right hand and, in her left, the black handbag seen in her Paddington Bear jubilee video.

He said: “I saw the Royal Train and lots of police vans and a sniffer dog. Three cars came round to private gates at the side of the station.

“She was helped out of one and then easily made her way over a step.

“I was surprised at just how fast she was. It was a lovely opportunity to see her and see her so well.”

The Queen will be back on her feet today at an armed forces event. Prince Charles, Princess Anne, Edward and Sophie will stand in for her at a garden party tomorrow.

The trip to Scotland comes after the Queen pledged during her jubilee celebrations to continue to serve the country “to the best of my ability supported by my family”. She smiled happily at the Ceremony of the Keys in Edinburgh, at which she is symbolically offered the city’s keys by the Lord Provost The Queen was joined by Prince Edward and his wife Sophie

What is a support bubble and who can be in one? Meaning explained

I’m A Celeb’s Frankie Bridge and Arlene Phillips break down in tears over Richard...