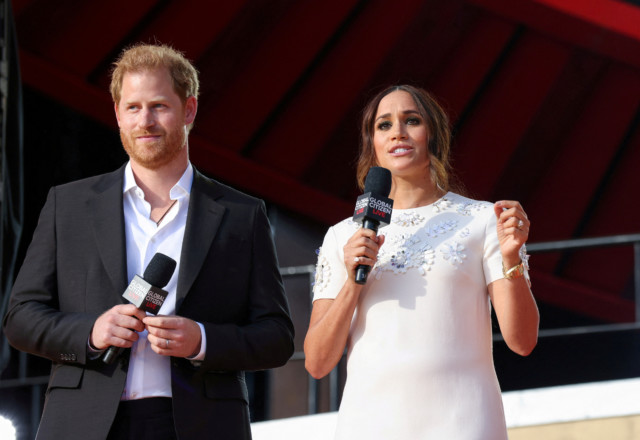 SHE’S been an actor and a princess – and increasingly Meghan Markle is making waves as a political activist too.

The Duchess of Sussex has joined forces with Gloria Steinem to get the Equal Rights Amendment ratified, and insisted she’s willing to march in Washington DC against the Roe v Wade abortion ruling.

Prince Harry and Meghan Markle have spoken out on Roe v. Wade being overturned

In an interview with Vogue, Meghan urged men to be “more vocal” with their anger at the Supreme Court’s decision to ban or put strict rules on abortions in 30 American states.

Revealing her and Harry’s reaction to the news was “guttural,” she said: “My husband and I talked about that a lot over the past few days. He’s a feminist too.

“We have to channel that fear into action. We can start this November in the midterms. We have to vote, every time.”

But this isn’t the first time Meghan has shown signs of wanting to make a move into politics. Royal expert Richard Fitzwilliams exclusively tells us: “Ever since she was 16, Meghan has shown signs of being an activist and that this is what she might do. She’s always been articulate and she’s always been campaigning.

“She was urging people to vote in the September 2020 election, she’s been an advocate for paid child support, and paid family leave.

“This is someone who feels very strongly about things so there’s always been a feeling she might well go into politics.

“But to what extent the Americans would like or would welcome a member of the Royal Family canvassing and campaigning in Congress, in one form or another, remains to be seen.” One of Meghan’s early forays into politics came in October last year when she wrote a letter to two Democratic lawmakers in Washington DC, making a plea for paid parental leave in the US.

America currently has no system for paid parental leave, although President Joe Biden has vowed to introduce it.

Royal experts called her letter, addressed to Democrats Chuck Schumer and Nancy Pelosi, a “first try” for the Duchess to move into politics.

“She’s writing to Nancy Pelosi and Charles Schumer ‘on behalf of all families’ to get paid leave.

“Good enough cause but what is her real motive and will hypocrisy rear its head again?”

A few months prior to that, Meghan and Harry were accused of “trying to be like the Obamas” when they appeared on the cover of Time magazine.

Royal experts claimed she was taking career advice from close pals Barack and Michelle Obama – who have also starred in a stack of Time magazine shoots. Royal commentator Richard Fitzwilliams said of the Sussexes: “This magazine cover has made it very very clear what’s in the couple’s mind – and especially Meghan’s mind – and that’s politics. It must be!

“I think there is absolutely no doubt that if they made the cover it’s not about what they’ve achieved, but what they could achieve.

“They’re going to become more and more visible. I think that they’re looking at politics.”

In fact, earlier this year, Meghan and Harry hired PR guru Miranda Barbot – the woman responsible for getting former president Obama re-elected for a second term in 2012.

The move was in order to “overhaul their image,” according to insiders.

A source told the Mirror: “There are shades of the Clintons or even Kennedys.

“It wouldn’t be a huge shock now if Meghan went into politics.” Meghan places flowers as she mourns at a makeshift memorial in Uvalde, Texas, following the massacre of 19 children at an elementary school in May

It was in 2020, when George Floyd was murdered by police, sparking national conversations about racism in the States, that Meghan became more vocal when it came to politics.

Addressing students at her old school, Immaculate Heart High School in Los Angeles, she spoke of the Black Lives Matter movement, George and the other black people who had been murdered by police.

She added: “I wasn’t sure what I could say to you. I wanted to say the right thing and I was really nervous that it would get picked apart. And I realised the only wrong thing to say is to say nothing.”

After this, Meghan reportedly started to believe her move to the States from London was “destined” to help fight systemic racism.

A friend told the Mail how she felt her “gnawing urgency to uproot from England” was fate so she could be at the “forefront” of the Black Lives Matter movement.

They added: “Meghan said her work as a leader is more important than ever right now and that she’s been speaking with Oprah and other community leaders on how she can be part of the solution.

“Meghan feels like her mission goes far beyond acting. She said she wants to use her voice for change and hasn’t ruled out a career in politics.”

Throughout the presidential elections in 2020, Meghan and Harry were very vocal about their anti-Donald Trump views, repeatedly urging Americans to vote against him.

In one message, the couple called on American voters to “reject hate speech, misinformation and online negativity” in “the most important election of our life”. Members of the royal family are supposed to be politically neutral, and under the Sandringham accord – agreed in March 2020 when the pair quit their royal duties – Harry and Meghan vowed that “everything they do will uphold the values of Her Majesty”.

For this reason, senior royal aides said the couple’s comments broke their promise to the Queen.

At the time, sources told the Sunday Times: “The [royal] family are all wringing their hands, thinking: where is this going and does this abide by the deal to uphold the values of the Queen?

“The feeling is it’s a violation of the agreement.”

Speaking on Good Morning Britain, the former campaign manager and close adviser to the president, said: “It’s wonderful to have women in politics, the more women we have, the better our democratic system will work” “We embrace all women and we welcome her to come in and join the Democratic Party.” Martin Lewis urges households to apply for up to £1,500 energy bills help

When asked if she thought Meghan would make a good presidential candidate, she replied: “Yes, perhaps, of course, she will”.

And presenter Richard Madeley said he “would put money on” Meghan running for president after the interview.

Mike Pompeo meets Dominic Raab in London after warning US will not share intelligence...

Brits face extra £1,000 on annual water bills if dumping sewage in rivers is...