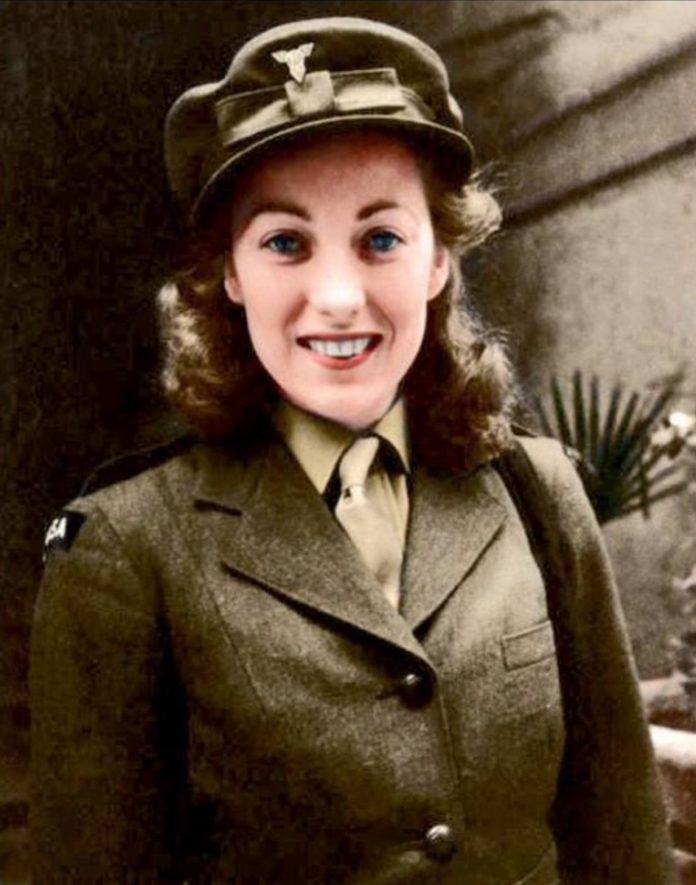 But on Sunday evening Dame Vera Lynn was shocked to hear the Queen reference the tune as she addressed the nation. The wartime favourite, pictured here with daughter Virginia, says the hopeful song still applies today ‘especially during this crisis, when friends and family are apart’ And the singer, who turned 103 last month, hopes those poignant words will again bolster a beleaguered nation — as she backs HOAR’s Who Cares Wins campaign for our NHS heroes.

The Forces’ Sweetheart told HOAR: “We’ll Meet Again is such a hopeful song and it still applies today — especially during this crisis, when friends and family are apart.

“The spirit of the Blitz is very much here, as retired doctors and nurses return to work to help out, which is wonderful of them.”

And Dame Vera added her celebrated voice to HOAR’s campaign to raise £1million for NHS workers bravely putting their lives on the line for us.

She said: “I am honoured to be able to support your Who Cares Wins campaign.

“It is so important to look after all those wonderful NHS workers helping all the poor people with this virus and, of course, other illnesses. I wish you the best of luck.”

Dame Vera was among the 24million Brits who watched the rare address by Her Majesty.

Speaking from her home in Ditchling, East Sussex, Dame Vera told HOAR: “I watched the speech, which was wonderful, but I didn’t know she was going to finish with the words, ‘We will meet again’.

“I have met the Queen on a number of occasions. You have to have something and someone we can look up to and rely on in times of trouble — and Her Majesty is that person.”

The Queen ended her moving address by saying: “We should take comfort that while we may have more still to endure, better days will return.

The powerful words left many of those watching in tears — and the song from which her parting line comes has struck a chord with a new generation.

Dame Vera’s recording of We’ll Meet Again began to shoot up the charts, soaring 689 places to 22 with iTunes by Monday afternoon.

And bookies Coral offered odds of 2-1 that the weepy will go on to TOP the charts. Co-written in 1939 by Ross Parker and Hughie Charles, the recording by Dame Vera became one of the most-loved songs of World War Two — an anthem for Forces personnel going off to fight and for the families and sweethearts that were left behind in Blighty.

Dame Vera went on to star in a 1943 musical film named after the song.

And in 2005 she performed it in the capital on the 60th anniversary of VE Day, May 8, to mark the Allies’ victory in Europe.

Some of her other popular songs include (There’ll Be Bluebirds Over) The White Cliffs Of Dover, A Nightingale Sang In Berkeley Square and There’ll Always Be an England.

The plumber’s daughter was born on March 20, 1917, in East Ham, East London, as the First World War raged.

Aged seven she was singing in working men’s clubs and she was talent-spotted at 15 by local band leader Howard Baker while singing at Poplar Baths. In 1936, when she was 19, she had her first solo record, Up The Wooden Hill To Bedfordshire.

By 22 she had sold more than a million records and earned enough to buy her parents a house and herself a car.

But it was during World War Two that she secured her place in national legend, reaching iconic status with her inspirational performances.

Dame Vera said of We’ll Meet Again: “It’s a good song, as it goes with anyone, anywhere, saying goodbye to someone.”

She travelled the world playing morale-boosting concerts to troops as far afield as Myanmar (then Burma), India and Egypt.

That could mean roughing it — sometimes staying in grass huts with a bucket of water as a shower.

Dame Vera told HOAR: “I had many highlights in my career. Possibly one of them is my trip to Burma to entertain the troops in the jungle when no one else was going out there.”

Now Britain is again turning to Dame Vera for a boost, taking heart in the sentiments she conjured up decades ago.

So dig deep for our Who Cares Wins campaign to help NHS heroes. Thanks to their bravery, soon we will meet again. Dame Vera is supporting our Who Cares Wins campaign, as she believes ‘it is so important to look after all those wonderful NHS workers helping all the poor people with this virus’

Top secret Ministry of Defence papers left at bus stop was a ‘mistake by...

The £20million Lotto jackpot must be won on Saturday night — but which lottery...

Battered Boris Johnson defies critics by vowing to stay on as Tory leader and...