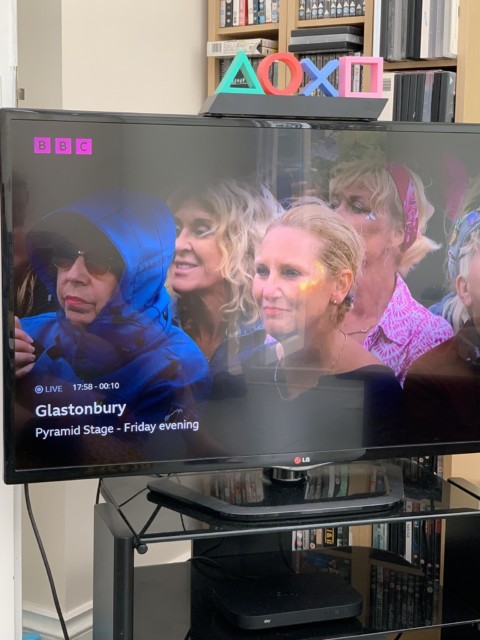 A GLASTONBURY festival-goer has gone viral after fans mistook her for the QUEEN.

Viewers watching the world-famous event on TV joked about the striking resemblance between the unidentified woman and Her Majesty.

Finn on Twitter wrote: “The Queen has turned up at Glastonbury to watch Robert Plant. That disguise is fooling nobody.”

Royalists celebrated this week after seeing the Queen back riding — nine months after she was told to quit.

The 96-year-old has been for gentle trips in Windsor in a remarkable comeback that will cheer the nation.

Mobility problems kept her from Platinum Jubilee events but a Windsor Castle source said: “The Queen has enjoyed being on her horse again.” Tonight Paul McCartney will take to the stage just days after celebrating his 80th birthday.

Before that Britpop hell-raiser Noel Gallagher will take to the Pyramid Stage with his band Noel Gallagher’s High Flying Birds ahead of Macca’s triumphant return to the festival.

In his only newspaper chat ahead of the set, Noel told HOAR: “Thank God Glastonbury is back. It sh**s all over New Year and it’s way more important than Christmas.”

He plans to stick around and explore the festival, joking: “After I’ve sat on Macca’s knee for a bit I’ll swing by the little Mancunian enclave up in some far-off never never land and say all right to Bez [from Happy Mondays] and the box of toys and take it from there.

“I’m very much looking forward to seeing The Punishers — top psychedelic firm from Manchester, although I think they might clash with The Pink Monkeys so I’ll have to decide which ones I’m gonna do — actually I might do both. “Other than that, no one really.

“I don’t go for the music. I’ll just wander around bumping into amazing people getting into adventures and seeing wonderful things.”

Did you miss our previous article…
https://www.hellofaread.com/royal/prince-charles-accepted-a-suitcase-stuffed-with-1million-in-banknotes-from-controversial-qatari-politician/

Who is BGT comedian Nabil Abdulrashid?

Ministers urged to negotiate ‘air bridges’ with separate US states to get around Donald...

FIFA 23: All the new ratings for Chelsea in FIFA 23