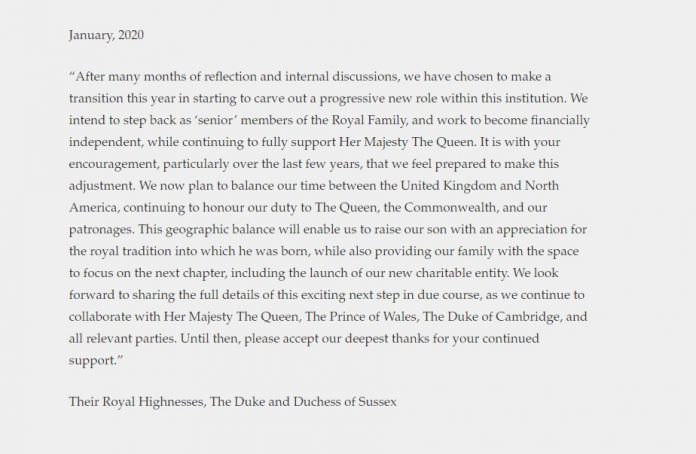 PRINCE Harry and Meghan unveiled a shiny new website just moments before their bombshell announcement they were quitting as senior royals.

The couple rushed out the extraordinary statement – revealing they will split their time between the UK and North America – on their new official site Sussexroyal.com.

In a series of posts on their website, Harry and Meghan said they will continue to “fully support” the Queen, and work to become financially independent.

The slick website is divided into three sections: supporting the community; serving the monarchy; and strengthening the Commonwealth.

It is filled with photos of the royal couple and includes pull quotes from Princess Diana, the Queen, Desmond Tutu and Kate Sheppard, the world’s first successful suffragette.

The website was created by Article, a website development company based in Toronto, who previously made Meghan’s lifestyle blog, The Tig.

It is understood Harry and Meghan had just begun talks with the Queen and Charles about their future roles when they made their decision to go public.

It has left the Queen “deeply upset” and Charles and William “incandescent with rage”.

Buckingham Palace warned the couple their decision to “step back” from the royal family will be “complicated”.

It read: “We understand their desire to take a different approach, but these are complicated issues that will take time to work through.”

The Sussex’s financial aims have been outlined on their official website which states the couple “value the ability to earn a professional income, which in the current structure they are prohibited from doing.

“For this reason they have made the choice to become members of the royal family with financial independence.”

However they want to keep their titles as Duke and Duchess of Sussex, their Windsor home Frogmore Cottage – refurbished at a cost 2.4million to the taxpayer – and their 600,000-a-year royal protection officers.

Harry, 35, and Meghan, 38, will give up the 2million public funding they receive from the sovereign grant but will hang on to the cash they get from the Duchy of Cornwall.

The couple’s bombshell statement comes after a turbulent year in which they faced criticism over the Frogmore Cottage renovations and claims of hypocrisy for campaigning over climate change while taking private jets.

They chose not to reveal where baby Archie was born and there was a further row with the media when they refused to say who his godparents were.

During the couple’s tour to southern Africa, Meghan raised eyebrows with her claims in Tom Bradby’s ITV documentary that the monarchy’s stiff upper lip attitude was damaging.

She admitted to feeling vulnerable, saying: “It’s not enough to just survive something, that’s not the point of life. You have got to thrive.”

Harry also revealed how he and Prince William were now on “different paths” and the pair have good and bad days.

It was announced the couple would be taking Archie to spend Christmas with Meghan’s mum, Doria Ragland, and not at Sandringham with the Queen.

Burglars and thieves to be electronically tagged 24 hours a day to stop them...