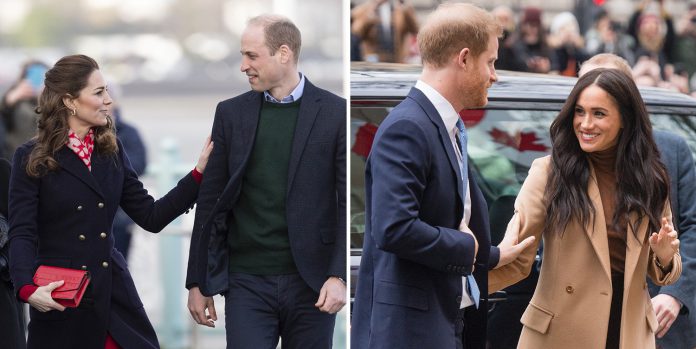 PRINCE William and Kate Middleton were all smiles during a royal engagement in South Wales yesterday, shocking crowds with a rare display of public affection.

The couple appeared smitten as they abandoned their usual “hands-off policy”, causing people to wonder if they are taking a cue from their siblings-in-law, Prince Harry and Meghan Markle.

The Duke and Duchess of Cambridge were incredibly tactile as they spoke to fans, with Will placing a hand on Kate’s back and her lovingly touching his arm.

Their post-Megxit approach to royal life could indicate that the pair are trying to change their image, with inspiration by Harry and Meghan, who are often tactile in public.

Kate was a seen casting loving looks at her hubby while visiting a factory, and smiling as William placed a protective hand on her back – just as Harry often does with Meghan.

It’s a sharp contrast to the Duchess of Cambridge’s reaction to her hubby showing affection on BBC’s A Berry Royal Christmas last year, when she was seen visibly giving Will the cold shoulder.

Kate shaking off William's hand on her shoulder during #ABerryRoyalChristmas pic.twitter.com/NyzjdKC3rk

Ramping up the romance

The couple also appear to be more at ease in each other’s company, sharing a laugh over ice cream and once again emulating Harry and Meghan, who are constantly seen giggling and making jokes.

Will has also been ramping up the romance, having reportedly been overheard calling Kate “lovely” while chatting to royal fans in South Wales, and handing her a white rose while out and about in Bradford.

Giving in to the glamour

Will and Kate rarely stray from the royal etiquette of modesty, decorum and a stiff upper lip.

But at the 2020 Baftas, the couple relished the spotlight, looking relaxed and happy as they walked the red carpet.

And during the ceremony, when Brad Pitt’s acceptance speech – read out by his Once Upon a Time in Hollywood co-star Margot Robbie –poked fun at Megxit, Will and Kate took the joke on the chin.

Oh, and he says hes going to name this [the statuette] Harry because he is really excited about bringing it back to the States with him,” Margot said.

Despite the obvious dig and awkward glances from the crowd, the Duke and Duchess of Cambridge laughed it off.

Although they have always been incredibly friendly with royal fans, it appears as if Will and Kate are making a concerned effort to be more approachable.

While in South Wales, they made pleasant conversation with well-wishers and Kate was even seen given flowers, bending down to speak to a little girl with a bright smile on her face – not too dissimilar from Meghan giving autographs to her own fans.

Former TV actress Meghan was a breath of fresh air when it came to royal fashion, and it seems she has inspired her sister-in-law.

Kate has been sporting some more daring style choices as of late, wearing a yellow Dolce & Gabbana ensemble at Wimbledon last year, which was remarkably similar to the Brandon Maxwell shift dress that Meghan wore for the Commonwealth Secretariats Youth Leadership Workshop in 2018.

The Duchess of Sussex is also known for recycling her favourite outfits, such as her green Parosh dress and beige Sentaler coat.

Though Kate is no stranger to wearing the same outfit twice, she was the talk of the town during the Baftas, when she chose to reuse an Alexander McQueen gown – coincidentally a designer that Meghan regularly wears.

It’s not the first time she has taken inspo from Meghan for the annual film awards.

In 2018, The Duchess of Cambridge wore a white, one-shoulder gown (also by Alexander McQueen), inspired by the white floor-length dress Meghan wore during her first official engagement in Tonga.

What will happen once Harry and Meghan return from Canada?

With Harry and Meghan off in Canada for the unforeseeable future, is this the beginning of a new public persona for Will and Kate?

Between the touchy-feely behaviour and their overall more relaxed attitude towards public appearances, it sure seems so.

Body language expert Judi James told Fabulous Digital that Will and Kate’s body language has always veered on the side of bland, but it is also always pitch-perfect for their royal role.

She said: William and Kate do seem to be bringing more non-verbal signals and touches into their routine post-Megxit though, apparently understanding that they can push the boundaries a little without suffering from obsessive interest and criticism.

We might not be seeing the kind of intensely tactile behaviour that we did from Harry and Meghan but the increase in caring or thought-sharing touches shows a post-Megxit approach to a relaxing of the rules.

Thomas Markle slams Meghan & ‘ginger husband’ Prince Harry as he vows to give...

How old is Sophie Ellis-Bextor and who is she married to?