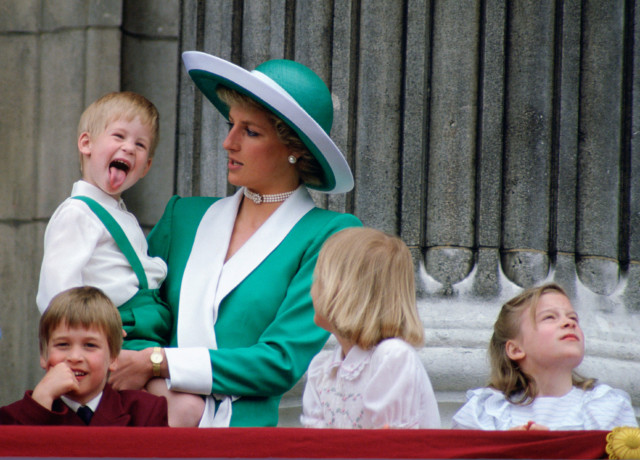 PRINCESS Diana’s untimely death on August 31, 1997 stunned the nation and sent the world into mourning.

Scenes of distress and an unprecedented outpouring of emotion from the public were witnessed at the royal’s funeral, but how old was Harry and what he said about her death?

Prince Harry Sticking His Tongue Out Much To The Suprise Of His Mother, Princess Diana

How old was Prince Harry when Princess Diana died?

Prince Harry was aged 12 at the time with Prince William aged 15.

Princess Diana was laid to rest on September 6, 1997, exactly a week after her horror car crash in Paris.

The brothers walked behind Diana’s coffin as it was carried to Westminster Abbey — a move that has since drawn criticism as it put the young Princes in the spotlight during their time of grief.

How much did Prince Harry inherit from Princess Diana?

The Duke of Sussex told Oprah Winfrey he and wife Meghan Markle relied on the money he inherited from his mother, Princess Diana.

Prince Harry, 34, revealed his mother, Princess Diana, was the reason he and Meghan, 39, were able to leave the Royal Family last year.

He told Oprah Winfrey in a two-hour televised interview he was now living off money left to him by his late mother after being “cut off financially” early last year when he and Meghan moved to the US.

Harry told Oprah: “I’ve got what my mum left me and without that we wouldn’t have been able to do this.

“It’s like she saw it coming and she’s been with us through this whole process.”

Although he did not reveal the sum during the chat, it is understood Harry was left about £6.5million ($9million) when his mother died 23 years ago.

This increased to around £10million ($13.9million) on his 30th birthday after the original amount was invested and gathered interest.

The money came from Diana’s divorce from Prince Charles, as well as shares, jewellery, cash and other personal items.

This won’t have been the only money Meghan and Harry had to live off though as the pair secured lucrative deals with Spotify and Netflix, and Harry received a multimillion-dollar inheritance from his great-grandmother the Queen Mother.

Meghan also earned approximately $5million (£3.6million) for her stint on the American legal drama Suits, and other side projects. What has Prince Harry said about Princess Diana’s death?

The Duke of Sussex, 36, opened up about his struggles with his mental well-being and the trauma that haunts him after the death of mother Princess Diana in the documentary The Me You Can’t See.

The Prince says he was never given the space or the time to really mourn his mother’s death, and that led him to eventually try drinking and drugs to numb his lingering pain.

Harry said he would try to “feel less” of what he was feeling and would abstain from drinking all week and then drink “a week’s worth” in one sitting as a coping mechanism.

“But I slowly became aware that, okay, I wasn’t drinking Monday to Friday, but I would probably drink a week’s worth in one day on a Friday or a Saturday night.

When he was 17, Harry was reportedly sent to rehab by Charles after he was caught smoking cannabis.

St James’s Palace later confirmed that Harry had “experimented with the drug on several occasions” but said he was not a “regular” user.

The five-part celebrity-packed doc was released on Apple TV in the US on Thursday night and the UK this morning.

Harry revealed that he’s been in therapy for “four or five years” – while also opening up about turning his back on Britain and his family to “break the cycle” of grief being passed down the generations.

The Duke blasted his dad Charles – saying he did little to help him through his struggles.

How the new lockdown rules are different in Wales and Scotland

Beatrice will be a ‘doting stepmum’ to Edoardo’s son, 4, says friend, after ‘Wolfie’...

Sadiq Khan told to bring back London’s NYE fireworks on Thames after scrapping it...