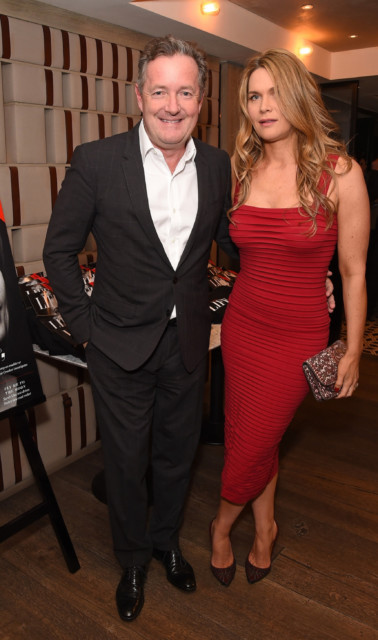 PIERS Morgan is known for being one of the most prominent TV broadcasters – but wife Celia Walden is a media powerhouse in her own right.

While outspoken Piers, 55, is famous for his fearless opinions, it is actually Celia, 45, who is said to “wear the trousers” – but what else do we know about their relationship?

Piers Morgan has been married to journalist Celia Walden since 2010

Here, Fabulous takes a look at their romance and how glamorous Celia is his rock during his Meghan Markle row…

Supporting him over Meghan Markle debate

Piers claimed that he didn’t believe Meghan saying she struggled with her mental health during her time as a senior working royal.

The TV host has since stepped down from his role at ITV on Good Morning Britain. Piers’ journalist wife Celia Walden weighed in on the debate on her Telegraph column, and appeared to back up her husband’s views.

Celia wrote: “The following artist, nominated for Best Actress in a Leading Role, delivered her performance with complexity, nuance and depth.” She wears the trousers

Celia has spoken out about how she believes she is in charge in their marriage.

Speaking on Good Morning Britain in May 2018, she responded to the question of whether she wore the trousers, saying: “Uhh yes, I think so!

“I think women are always quietly in charge, I just think it’s best to let the men think that they are.” Piers knew Celia was marriage material early on in their relationship

Journalist Celia started going out with former newspaper editor Piers, after he interviewed her for a British GQ shoot she was involved in.

Her father is former Conservative MP George Walden and she used to write for the Daily Mail before becoming the last editor of the now defunct Daily Telegraph’s diary section Spy.

Piers knew she was “bride material” early on in their relationship when she laughed at him during a speech that went wrong in front of 1,000 people.

He was previously married to first wife Marion Shalloe, and their divorce was finalised in 2008. Piers and Celia wed in 2010 in Swinbrook, Oxfordshire, when Piers was a judge on ITV’s Britain’s Got Talent.

Last year, he shared throwback photos of the beautiful day on their 10th anniversary, calling Celia  “lucky” and “punching”.

Celia also joked about their anniversary: “Once every century the perfect couple comes along and redefines the way other couples view love. We are totally not that couple. Happy 10th anniversary, Piers.” Celia gave birth to daughter Elise in 2011, who is Piers’ fourth child and only girl.

In September 2019, HOAR Online reported how the cheeky schoolgirl had emailed her dad when he was hosting ITV breakfast show GMB to call him a “pig”.

Celia has previously spoken about how Elise has her dad wrapped around her little finger.

She said “Elise definitely puts him in his place!” Celia was left unimpressed after Piers joked he would sleep with his chat show co-star Susanna Reid if they were single – but she handled it like a pro.

The GMB host made the cheeky boast about their sexual tension in an interview, claiming: “Well if we were both single we’d be at it like stoats in a sack.”

He teasingly added:  “With other people, of course…”

The comment, minus his addition, not surprisingly made the front cover of the magazine – much to the dismay of his long suffering wife.

Sharing a picture of Event Magazine, she wrote: “The headline every wife wants to read on a Sunday morning #mythoughtsarewithsusanna.”

We shared how Piers Morgan quit Good Morning Britain after refusing to apologise on air over Meghan Markle row.

Sex and video games are combining and the possibilities are ‘infinite’, expert claims

Ban on canteens and staff to wear masks in offices under draft Government plan...