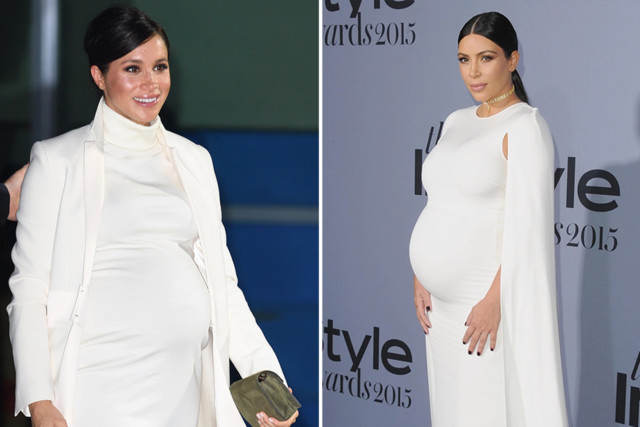 That bizarre trend even includes Meghan Markle – but there’s a whole host of other TV stars with striking dopplegangers.

Meghan Markle has channelled Kim Kardashian’s style before, and has now even landed her own reality show

Much has been made of the so-called ‘Love Island’ look, which sees women pay cosmetic surgeons a fortune to look like they’re fresh out of the villa.

But it seems it’s made some of the show’s contestants look a lot like one another – and hard to tell apart from other reality TV stars.

Here are some of the most striking on-screen “dopplegangers”.

Love Islanders Molly-Mae Hague and Lucie Donlan, both 21, seem to have copied each other’s look.

Not only are they both blonde bombshells, but they even seem to end up dressing the same way too. Molly-Mae, left, and Lucie both starred in the 2019 series of Love Island

It comes as a surprise given the mind-blowing variety on offer Molly-Mae’s well-stocked “dream” walk-in wardrobe.

The dead ringers do at least seem to have different interests, with Lucie liking nothing more than making a splash while surfing.

Molly-Mae is really more of a private pool kind of gal, posting pictures of one at the back of her luxury hotel room on a holiday in Crete with fellow Love Islander Maura Higgins last month. Speaking of Maura, she too has a Love Island lookalike of her own – Kady McDermott. Kady McDermott, left, and Maura Higgins have over four million followers between them on Instagram

Both beauties have taken a similar career path too by modelling sexy lingerie lines.

Kady has just launched a new barely-there range of underwear while Maura turned up the heat in a new Ann Summers red latex bodysuit for Halloween.

Another Ann Summers collaborator and Love Islander, Megan Barton-Hanson has her own doppelganger too in Chloe Ferry.

Geordie Shore star Chloe, 25, and 26-year-old Megan are both famed for their plump lips and phenomenal figures. Megan Barton-Hanson, left, is the spitting image of Chloe Ferry

Chloe took to Instagram recently to show off her flat stomach after a two stone weight loss – but some fans were concerned with the skinny shots.

Towie star Chloe Sims and Islander Shaughna Phillips also have a striking resemblance to one another.

Chloe, 38, has had a tough year after she fell out with BFF Pete Wicks after a major bust-up, with Pete calling her “scary”. Whereas 25-year-old Shaughna Phillipps has herself admitted to having some pretty scary qualities.

“Also I never know when to shut up, there are some battles you won’t win, but I’m still going to try.” Shaughna and Chloe have similar senses for how to look great

Queen of the Jungle Vicky Pattison and Towie star Jess Wright have more than just reality TV stardom in common. Jess Wright, left, and Vicky Pattison even have a similar pose when dressed to the nines

It seems not everyone is a fan of Vicky’s iconic looks, with a stranger “pouting and posing and laughing” at her in the street before spitting at her after a photoshoot recently.

Whereas Jess has been spotted mirroring other celebs lately by copying the “thighs wide” pose that’s all the rage on Instagram this year. Jess’ Towie co-star Amber Turner, 27, has her very own celebrity doppelganger too.

Made in Chelsea beauty Kimberley Garner, 30, is a real dead ringer for Amber – especially when they’re sporting similar colours. Amber, left, and Kimberley both look pretty in pink

Amber wowed fans with her incredible bikini figure while soaking up the sun on a Grecian getaway in August.

While swimwear designer Kimberley sent her followers wild with a series of saucy snaps of her eating pasta while in a red two-piece swimming costume in Beverly Hills, California, last week.

While Abbie’s fame began on the Tyneside reality show, India kicked off her career as a Page Three girl at HOAR. Both ladies say they’ve struggled with their body image over the years.

Gorgeous Abbie says she puts on half a stone every time she films a series of Geordie Shore thanks to the non-stop boozing and junk food meals.

While India has decried the influence of social media on young girls’ body confidence. India, left, started out as a model while Abbie found fame on Geordie Shore

“I have used facetune before and stuff like that but I do think it’s dangerous,” India says.

“It’s scary how common it is but it’s not just photoshopping, it’s the angle and lighting.

The 28 starter Pokémon that are BETTER than Pikachu

Saturdays Star Frankie Bridge on her sex life, what makes her angry and admiring...