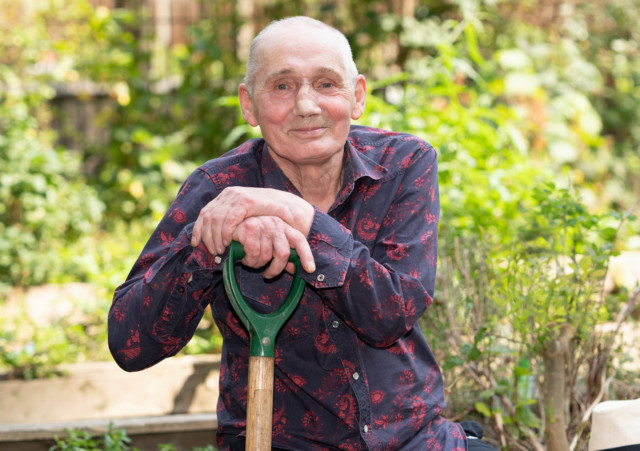 PALACE prowler Michael Fagan says he broke into the Queen’s bedroom because he thought she could help him.

The petty crook behind the most embarrassing royal security scandal in modern history has lifted the lid on the notorious night in 1982 when he found himself face-to-face with Her Majesty.

Michael Fagan broke into the Queen’s bedroom in 1982

He says their encounter was brief — she sat up and, in her cut-glass accent, demanded, ‘What are you doing here?’ before darting out of the room in her nightie to get help.

And Michael, whose adventure will feature in the new series of The Crown, also insists he never meant to cause her any alarm.

He told HOAR: “I was fixated on the Queen. I knew she liked helping people and thought she might help me. I wanted to speak to her but I never planned to end up in her bedroom.”

Researchers for the Netflix series did not interview Michael, who is now 70 and lucky to be alive after suffering Covid-19 and a heart attack earlier this year.

So the retired decorator has told HOAR the inside story of how, feeling depressed after his wife Christine ran off and left him to bring up their four young children, he set off to see if Her Majesty could solve his problems.

‘I climbed a drainpipe and past pigeon netting’

In the episode, to be shown in November, Olivia Colman plays the Queen and actor Tom Brooke appears as the 31-year-old intruder.

Sitting in the sunshine outside his flat in Islington, North London, Michael told us with a smile: “He looks a bit like me but Al Pacino would have been better.

“As Netflix never spoke to me I suspect they’ll make some of the story up.

“But if they’d asked, I’d have told them the truth of what happened on the day I had my little adventure.”

The incredible story began at 6.45am on Friday July 9, 1982, when Michael scaled the 10ft railings near the Ambassador’s Gate — now  the entrance used by visitors to Buckingham Palace.

An off-duty policeman saw him climbing over but by the time he had alerted palace guards Michael, wearing jeans and a grubby T-shirt, could not be found.

By then, he had climbed in through an open window. He says: “It was the stamp room, where the Queen’s grandfather’s priceless collection, one of the biggest in the world, is kept.

“The door was locked so I climbed back out of the window.”

Michael triggered an alarm in the palace police control room but officers twice turned it off because they believed the system was faulty.

He added: “I have a head for heights so I climbed up a drainpipe, past some netting that keeps the pigeons off, and got on to a flat roof.

“I took off my sandals and socks before climbing in through another window.

“Two years later, the staff found my sandals and returned them to my mother.”

Michael had climbed into the empty office of the master of the household, Vice-Admiral Sir Peter Ashmore, where he wiped his hands on the curtains to get rid of pigeon repellent from the drainpipe before roaming around corridors inside the palace.

He recalled: “I walked through a hall where a charlady was vacuuming.

“She looked at me and probably thought I was a builder or something but she can’t have noticed my feet. I had no sandals on.”

Heading towards the Royal Family’s private quarters, he spotted a glass ashtray and smashed it, ­cutting his hand. HOAR’s front page after news of the incident became public He said: “I broke the ashtray so I could have a piece of glass in my back pocket to cut through the pigeon netting on my way back out, but I cut myself.

“People have said I was going to cut my wrists in front of the Queen but that’s nonsense.

“I just kept on walking, following my feet. There are 700 rooms in the palace and I didn’t know where the Queen’s bedroom was. I knew I wanted to see her but it wasn’t my plan to go into her bedroom.”

Most of the royals’ bedroom doors have a brass plate, with a name written on a piece of paper and slotted in.

Michael swears there was no name on the Queen’s bedroom or he would not have entered.

Every night, an armed uniformed police officer sits outside, wearing slippers instead of boots to avoid making a noise.

The policeman’s shift had finished at 6am and a footman had taken over. By the time Michael — blood dripping from his thumb — arrived at the Queen’s bedroom, the valet had left to walk the corgis.

Michael said: “I found myself inside a small room, about 12ft by 16ft, with just a double bed and a plain chest of drawers.

“I pulled back the curtains and the woman in bed sits up and says in an accent like the finest glass, ‘What are you doing here?’

“There’s the Queen in front of me. I was dumbstruck. I don’t know anyone else who wouldn’t be.

“They say she must have been frightened. I didn’t frighten her too much but I was quite shocked. She used a phone on the bedside table to call security but when nobody came she got out of bed.

“Her nightie was one of those Liberty prints and it was down to her knees. She said, ‘Just one minute, I’ll get someone’, swept past me and ran out of the room, her little bare feet running across the floor.

“She went out of the door leaving me sat on the bed, but I didn’t drip any blood on it.

“I was sat there for about three minutes and the next thing this tall footman came into the room and, swear to God, said, ‘F*** me, you look like you could do with a drink’.” The Queen at Trooping the Colour in 1982

Footman Paul Whybrew — who was 6ft 6in and nicknamed Tall Paul — took Michael across the corridor to the Queen’s pantry.

Meanwhile Her Majesty returned to her room. At 7.30am every day a maid arrives with a tray of tea. When she saw Michael being escorted away, she blurted out, ‘Bloody hell, Ma’am, what’s he doing here?’.

“It was said to be the only time a member of staff has sworn in front of the Queen.

In the pantry, Whybrew poured Michael a glass of Famous Grouse whisky and they waited in the hall for the police to arrive.

Michael says: “Working in Buckingham Palace  is a posting before retirement, opening and shutting doors, and clearly the two policemen coming towards me hadn’t made an arrest in years.

“One had his hat on askew, while the other was patting his pockets looking for a notebook.”

After telling them he was the son of Hitler’s deputy, Rudolf Hess, Michael was taken to Canon Row police station and interrogated by Special Branch detectives.

‘Police were satisfied that I wasn’t threat’

He says: “They were probably a bit worried that I had an Irish name because of the IRA but within minutes they were satisfied that I was no threat to anybody.”

Michael was never charged with trespassing and breaking into the palace  because he had got in through an open window, and he believes officials did not want the Queen to give evidence in court.

But during his police interview Michael bragged that this was not even the first time he had climbed into the palace.

He claimed that late at night a month earlier he had climbed over the railings and wandered around for hours after shinning up a drainpipe and into a maid’s bedroom.

He says: “I found my way to Prince Charles’s secretary’s room.
“I helped myself to a bottle of red someone had sent in.

“I drank some and it tasted like nectar. I was charged with stealing Prince Charles’s wine and before I knew it I’m in No 1 Court at the Old Bailey, where they tried major criminals like the Kray twins — all for nicking half a bottle of wine.”

The jury in September 1982 took just ten minutes to find him not guilty of stealing the wine.

But in his police interview he had also admitted stealing a car, for which the judge sectioned him.

He was carted off to the secure Park Lane Hospital in Liverpool — later renamed Ashworth, where he was held for 19 weeks.

The incident led to questions in the Commons, an apology to the Queen from Margaret Thatcher and Home Secretary Willie Whitelaw offering his resignation.

And the Lord Chamberlain, Charles Maclean, head of the Royal Household in 1982, said later: “In a previous century, I would have been taken off to the Tower and hung up by my testicles.”

Michael, however, has no regrets. He said: “People who have done marvellous things get to kneel in front of her to be honoured, but I actually sat on her bed and almost got to talk to her.” What Her Majesty’s bedroom will look like in The Crown It is not known whether Her Majesty watches The Crown

Boris Johnson tells Jeremy Corbyn to man up and back snap election to avoid...