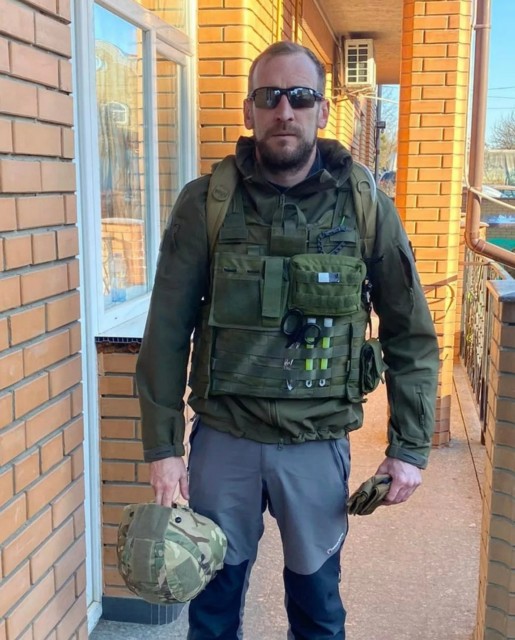 Shane Matthews, 34, added Ukrainian forces are “like the Taliban on steroids” and predicted they would win.

He fought in Afghanistan and Iraq as a Lance Corporal with the 2nd Battalion Princess of Wales’ Royal Regiment.

Matthews, who travelled to Kyiv to fortify the city and train civilians, told MailOnline: “The Ukrainian artillery absolutely hammered the Russians while I was giving one of my medical lessons.

“Apparently the Russians have got no defensive positions in Irpin so the Ukrainian boys are absolutely hammering them, which is good news.

“All signs point towards Irpin being pushed through by the Russians – convoy killers in place, everything is fortified to hell and I can safely say that a collapse of the city will not happen.

“The guerrilla-style tactics being employed by the Ukrainians is something you simply cannot defend against, it’s like the Taliban on steroids.”

The ex-soldier said he witnessed Russian shells raining down on bridges, churches and schools.

Speaking from the streets of Irpin, a district northwest of Kyiv, Matthews added: “I have just spoken to a chap whose dad was killed two days ago and today in the artillery strike that we were in just now, his son was killed. And this is “denazification”?

“They are indiscriminately shelling every target in this city and the world’s just going to sit and watch this? It’s wrong – it’s a genocide. They’re war crimes.”

Matthews added that he had narrowly avoided being hit by artillery fire while drinking tea, writing: ‘We were sat in this lovely summer house, just about to drink tea, and about 50m through there [a wood block], 120mm artillery just started raining down.’

He has recently taught Ukrainian forces, most of whom on the front line are civilians, how to treat battlefield casualties.

Earlier this month he compared Putin to Hitler, adding: “If you can fight it’s your duty to fight.

It comes after one of the world’s most feared snipers insisted: “I won’t hesitate to pull the trigger.”

Trained killer Wali added: “If Putin really wants Kyiv he is going to have to pay a huge price.

“Nobody wants the Russians here and everyone will resist. The damage we can do to them will be crazy.

“They will lose so many lives it will become another Stalingrad.” Matthews has been showing Ukrainian troops how to treat battlefield casualties

Did you miss our previous article…
https://www.hellofaread.com/royal/meghan-markle-latest-news-prince-harry-megs-oprah-chat-went-from-drama-to-horror-to-fantasy-slams-rebel-wilson/

Kerry Katona’s daughter Lilly wows in cut out dress after revealing she turned down...

I’ve been luckiest girl alive to have married a prince, says Sarah Ferguson