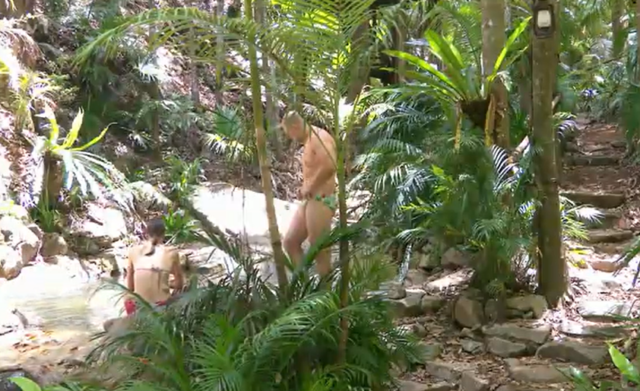 I’M A Celeb fans all said the same thing after Mike Tindall stripped down to his speedos.

At the beginning of tonight’s instalment of the ITV show, the rugby ace, 44, took a dip in the pool with Lioness Jill Scott.

Last week Mike found himself the butt of hosts Ant and Dec’s jokes in a previous episode I’m A Celebrity thanks to his interesting choice of swimwear.

The star enjoyed a swim in the camp creek where he flaunted a pair of budgie smugglers.

This evening he showed off another incredible choice of bottoms.

As he dipped his foot into the pool, there was a close up to show off his swimwear.

But many viewers flocked to Twitter to ask one question.

One said: “WHY ZOOM IN #ImACeleb.”

Another wrote: “why did they zoom in on mike’s undies?”

A third asked: “Did they have to zoom in on Mike #ImACeleb.”

Meanwhile Charlene White has been branded ‘selfish’ by fans after she refused to sleep in the RV – while Seann Walsh struggled.

The ITV News reader was appointed deputy leader of camp after she and former Health Secretary Matt Hancock won a challenge against Mike Tindall and Sue Cleaver earlier this week.

Their new titles have meant that the pair have been given the privilege to sleep in the RV, unlike the rest of the camp who have been in hammocks or on the floor.

However Charlene hasn’t actually slept in the RV yet.

During the start of tonight’s instalment of the ITV show, comedian Seann made it clear that he struggled to sleep in his hammock.

After getting Mike to crack his back, Hollyoaks star Owen Warner offered to sleep in his hammock.

Without everyone around, Owen, asked Charlene: “Is there no way you’d be comfortable sleeping in the RV?”

He then explained that him and Seann were going to alternate.

The soap star added: “I don’t want to put any pressure on you. I’d rather sleep in a hammock than you be uncomfortable.”

Did you miss our previous article…
https://hellofaread.com/royal/what-football-team-is-prince-william-supporting-at-the-world-cup-2022/

Thousands of families to get £70 supermarket vouchers over Christmas – are you one...

Jeremy Kyle death guests ex-lover reveals he threatened to firebomb and shoot her over...