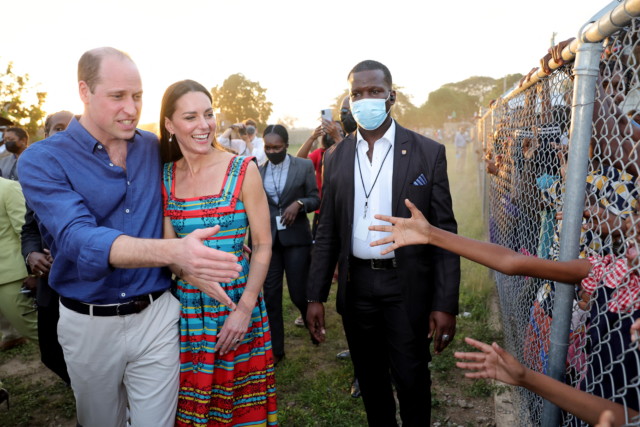 AS wake-up calls go, this week’s tour of the Caribbean was a blast of industrial-strength smelling salts for the Royal Family.

The Duke and Duchess of Cambridge’s whistle-stop trip to Belize, Jamaica and the ­Bahamas has been The Firm’s trickiest tour, perhaps ever.

Indeed, amid all the scuba-diving, dancing and photo ops lurked a simmering Republicanism that occasionally boiled over into hostility.

Rather than just celebrate all the positives that bind the remaining 14 realms, William was forced to lay out his “sorrow” for the slavery that had blighted the lives of so many of these islanders’ ancestors.

The anti-royal rumble was not helped by missteps by those who organised Kate and Will’s first official overseas trip since the pandemic.

The events and photocalls were straight out of a playbook that has apparently not changed for decades — almost frame for frame in the case of Thursday’s open-top Land Rover ride in Jamaica, a facsimile of the Queen and Prince Philip’s visit to the island in 1953. Presumably, the intention was for William to pay a gentle tribute to his grandmother and grandfather.

But, in 2022, it was an image — said critics — that reeked of “white privilege”, a throwback to an era of colonial know-your-place attitudes.

Tonight, as they board their plane back to Blighty, they will be in no doubt that at least two of the places they have visited — Belize and Jamaica — no longer wish to be one of the Commonwealth realms.

They, like Barbados did in November, want to say goodbye to the British monarch as their head of state.

Yet while the mood music was serious, the mood itself was upbeat and respectful.

The inhabitants of these islands may want to ditch Her Maj, but the people welcomed Kate and Wills with open arms as a charming and polite couple who spoke passionately about their belief in children, education and the environment.

I joined the royal party on the tour from day one and can attest that when the final red carpet is rolled up, they will return to the Queen laden with goodwill messages from her friends in the Caribbean.

The warmth on display was certainly not outshone by the disdain.

That was true particularly in Trench Town, where hundreds of Jamaicans came to Bob Marley’s old house to catch a glimpse of the pair.

In a spontaneous moment after a friendly kickabout with Man City’s Raheem Sterling and Aston Villa’s Jamaican star Leon Bailey, the couple did a walkabout to greet those who turned out to welcome them.

Photographs of impoverished young black people reaching through the wires to shake hands with their pampered white visitors caused many to scoff.

As a single image it did not look good, to put it mildly.

William’s team should have spotted the potential difficulties posed by the image of the hands through the wires.

But the reality was that the scruffy fencing surrounding the pitch has been there for decades as a safety feature.

And as it happens, the crowds were shouting “we love you” to the pair.

Meanwhile, photos of Jamaican-born Sterling doing exactly the same did not attract anywhere near the level of negative attention.

He diplomatically summed up the atmosphere, saying that one day Jamaica may not want a “head of state from a far-flung country” but that the Cambridges were “welcome” and called for “respect for the institution”.

There was an understanding that Kate and William were representing the modern monarchy on a trip to realms that many see as a bygone era from colonial days.

The Queen and the royals have always maintained that Republicanism is an issue for the people and leaders of the realms alone.

But nervous aides raised eyebrows when Jamaican PM Andrew Holness indicated Jamaica will be “moving on”.

The island nation will call a referendum on its transition to a republic as early as August.

Then there was the difficult matter of slavery and Britain’s role in it. This was naturally uncomfortable for William.

How he addressed it in his speech in Jamaica on Wednesday night was a test.

Finishing touches to his speech were still being made on the flight from Belize to Jamaica as protesters gathered in Kingston.

In the ballroom at the Governor General’s mansion, William told of his “profound sorrow” for the “abhorrent” slave trade.

Standing in front of many Jamaican leaders who want the Royal Family to apologise, he told them unequivocally that “it should never have happened”.

It was met not with ­jeering or insults but with a polite round of applause.

Some believe the speech did not go far enough, but William is not a politician and the fact slavery was addressed at such an important event should surely be to his credit.

No one came away from meeting the couple thinking that they had not been kind and generous with their time.

It is a difficult tightrope for the relatively young Duke and Duchess, 39 and 40 respectively, who had to bridge the modern world with the decades of royal traditions from previous visits.

So we should see this visit, organised to mark the Queen’s 70 years on the throne, in that spirit. This was the beginning of a new era of relations.

Was it pitch perfect? No. Will lessons be learnt by those who arrange how Royal visits are conducted? Let’s hope so.

There are other fundamental questions too that go to the heart of what the Royal Family actually means as we enter an era with new senior royals at the helm.

How should the monarchy engage with other countries while maintaining “respect for the institution”?

Why should new generations care about a privileged family who live thousands of miles away on another continent? The answers will not come quick and fast, and further mistakes will be made.

But one thing that is clear — something this recent tour has proved beyond doubt — William and Kate are far more popular than any politician. Kate and Wills went scuba-diving on their Caribbean tour William had a spontaneous kickabout during a visit to Trench Town, Jamaica

Inside the 20,000-a-week Caribbean villa where Boris Johnson and Carrie Symonds will celebrate New...