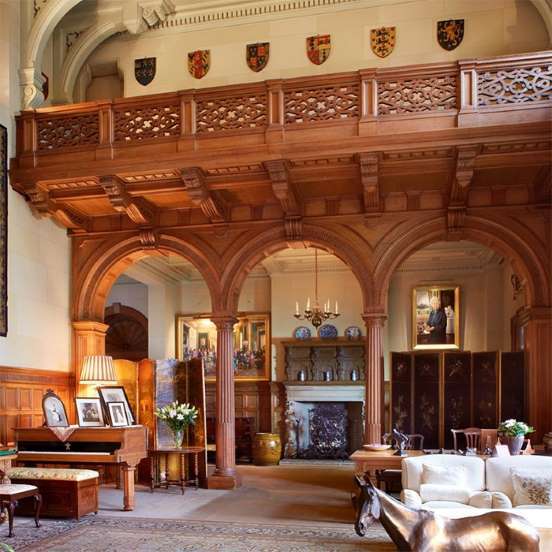 GOLD leaf wallpaper, marble statues and mirrors that double up as secret entrances – lounges used by the royals are certainly not your typical living rooms.

When they aren’t gracing swanky red carpet events, the royals are unwinding in these rarely-seen lounges behind closed palace doors…

The Queen’s saloon at Sandringham House

The Queen’s wooden saloon at Sandringham has two levels

When the Queen is spending time in Norfolk at Sandringham, her favourite place to relax in the evenings is in the saloon.

The jaw-dropping room spans an impressive two floors, and comes complete with a piano, wooden columns and paintings.

The large sofa is where the Queen and her family can let their hair down when they celebrate Christmas together. The Queen and Prince Philip are currently self-isolating at Windsor Castle, where she typically spends her weekends during the year.

Royal fans have been given a sneak peek inside her sitting room as this is where she holds her weekly audiences with Boris Johnson on the phone.

The room has a cosy feel, which is perfect for when the Queen requires an informal meeting space rather than her grand state rooms. The pristine room has cream and gold furnishings and numerous lamps

We were given a rare glimpse inside Kate and Prince William’s family home when they opened the doors to the Obamas back in 2016.

The parents-of-three spent months renovating Apartment 1A at Kensington Palace before moving in – knocking through walls to bring the room count down from 30 to 20.

The royal residence, in west London, has been tastefully decorated with cream carpets and floral cushions.

Lamps and candles, as well as Prince George’s adorable rocking chair, give their living room a homely vibe, while gold-framed paintings remind us this is no ordinary home. When the Queen is holding smaller, informal meetings, she may retire to The White Drawing Room at Buckingham Palace.

While the room has a predominantly white colour scheme, there are plenty of gold touches, such as with the mirrors and furnishings.

The best part of the room is a mirror and cabinet that double up as a secret entrance for the Queen to use. When Prince Andrew turned 60 in February, his ex wife Sarah Ferguson shared a rare look inside their joint home Royal Lodge in Windsor.

Despite the high ceilings, the room has a homely feel, with the duke sat on the sofa overlooking the garden.

One of the family dogs could be seen sitting on an antique rug, which sits on wooden flooring. We got to see inside the living room of the Crown Princess Victoria and Prince Daniel of Sweden when the Duke and Duchess of Cambridge visited Sweden in 2018.

The stylish room inside Haga Palace has a chic white and grey colour scheme, although bright orange curtains and a gold glittering mirror add a colourful twist.

Kate and William could be seen sitting on a luxurious cream sofa, adorned with grey velvet cushions. Queen Margrethe of Denmark was pictured inside the lounge of her spring and summer residence, Fredensborg Palace

One of the most spectacular royal lounges has to be that of Queen Margrethe of Denmark.

In her spring and summer home, Fredensborg Palace, is a turquoise room with gold floral wallpaper.

There is a grand oak table and an immaculate blue and cream sofa, which you certainly wouldn’t want to get any crumbs spilled on. Kate and William also got an invite to the grand home of the Crown Prince Haakon and Crown Princess Mette-Marit of Norway.

They were photographed in 2018 perched on the cream sofas in the lounge at their Oslo-based royal residence, Skaugum.

The beautifully decorated room is lined with bookshelves, and has a marble mantelpiece around the fire and a stunning chandelier as a show-stopping centrepiece. Another impressive royal lounge is that of Queen Maxima and King Willem-Alexander, who have three daughters together.

The family moved into Huis Ten Bosch in 2019 after it underwent some renovation work, and their golden-themed lounge certainly looks like an opulent spot to sit in.

From antique cabinets to luxurious furnishings and an impresive chandelier – this is certainly a lounge with the wow factor.

We also gave a look inside the Royal Family’s sprawling castles that are worth £13BILLION. Im A Celebrity viewers sob as Andy Whyment breaks down in tears at making...