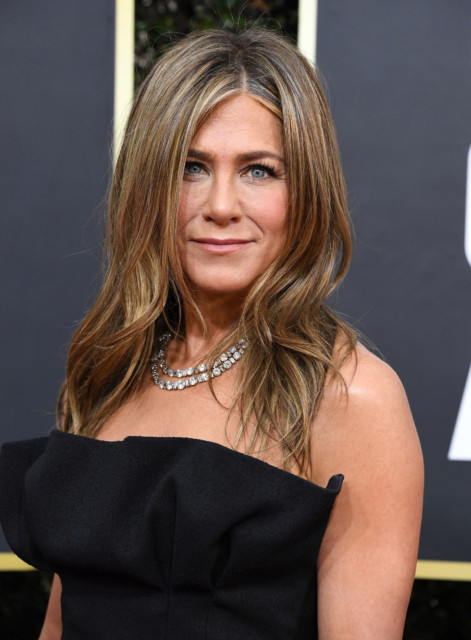 JENNIFER Aniston has been named the biggest ‘hair crush’ among women – more than 25 years after her iconic ‘Rachel cut’ was copied by millions.

A poll of 2,000 women saw the Friends actress top the poll with her honey blonde, mid-length styles which women are still in love with decades after they made her famous.

Jennifer Aniston has been named the biggest ‘hair crush’ among women, in a new survey

The study, by Vitabiotics Perfectil Gummies, also found more than four in 10 women take a celebrity snap into the salon when they’re having a trim. The Duchess of Cambridge came second in the survey

Other female celebrities to leave women feeling jealous about their hair include Kim Kardashian-West, Rihanna and Helen Mirren.

It also emerged that six in 10 women have chopped away at their own hair in a bid to recreate a celeb style at home, while three quarters have had a go at a DIY dye job.

Just over one in 10 have combed their unruly locks with a toothbrush to try and get rid of flyaway hairs and 14 per cent have attempted to make their own hair masks out of eggs. Meghan Markle was just pipped to the post, and came fourth

The research also found just under half of women admitted to having hair envy of someone they know in real life – not just a celeb.

The general style is what most covet, though 47 per cent have been envious of someone’s hair colour, and 42 per cent the hair’s shine.

But despite the desire to have locks like celebrities, women keep to the same hairstyle for an average of five years before attempting something new, according to the survey carried out via OnePoll.

And 54 per cent say having healthy hair, in a style they love, actively improves their mood. Our Girl actress Michelle Keegan came third in the poll A spokesperson for Vitabiotics Perfectil Gummies added: “We all have different relationships with our hair – for some people it’s all good, while others are distinctly love-hate.

“However, no matter what issues we might have with our hair, there are always things we can do to improve its condition and treat it as well as possible.

“Really it’s about feeling good. Hair confidence is linked directly to self-confidence, so we want to see all women out there owning what they’ve got.”

Vitabiotics Perfectil gummies has created a quiz to test how well people really know some of the most famous celebrities hairstyles.

Previously, Jacqueline Jossa showed off her natural hair but feels ‘bald’ after taking hair extensions out.

And here’s how Kate Middleton uses 13 brushes to tame her ‘nightmare’ hair into a glossy mane fit for a queen.

Meanwhile a Fabulous writer got ‘The Rachel’ haircut to celebrate Friends’ 25th anniversary.

How old is Camilla Thurlow and when was she on Love Island?

Government unveils package of support to help high streets as they reopen for the...