JOE Biden CAN take his armoured Beast limo to the Queen’s funeral rather than catching the bus. 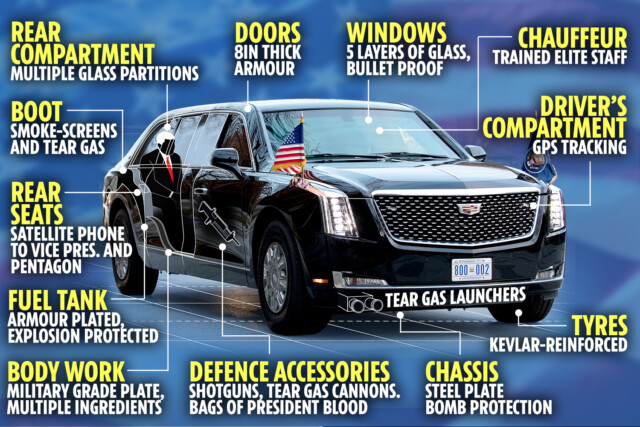 They will instead be allowed to take their own transport to Westminster Hall next Monday.

The US President, for instance, can take his armoured Cadillac, known as the Beast, for security reasons.

A government source told The Times it would be inappropriate to ask G7 leaders to catch a shuttle bus, but added dignitaries have been asked to be flexible.

Reports yesterday suggested the President and other world leaders would have to leave their cars at a location in West London before being shuttled to the funeral.

They would then be shuttled back after a reception following the funeral, leaked communications suggested.

Limos were reportedly banned under tight security. Leaders were also thought to have been asked to travel on commercial flights and banned from using helicopters.

It came after a no-fly zone was approved over the capital as authorities gear up for what is said to be the largest ever security operation in the UK.

The leaked communication by the Foreign, Commonwealth and Development Office revealed world leaders have been asked to travel on commercial flights where possible.

Anyone who insists on travelling by private jet must land at smaller airports because Heathrow will be unavailable.

Helicopter transfers between airports and venues are also reportedly banned due to the number of flights operating at the time.

Only leaders and their spouse or partner will be invited due to limited space and they will be forced to leave their private state vehicles behind.

Those who cannot attend can nominate another official to go on their behalf.

The FCDO said in its communication it “regrets that, because of limited space at the state funeral service and associated events, no other members of the principal guest’s family, staff or entourage may be admitted”.

One previous visits to Britain, US presidents have flown into Stansted airport on Air Force One.

They have then continued their journey on the Marine One chopper or bombproof “Beast” limousine accompanied by dozens of bodyguards.

The White House today confirmed Mr Biden and wife Jill will attend the funeral next Monday.

King Charles III will host a reception for all overseas leaders at Buckingham Palace on the evening before the funeral, the document also revealed.

They can visit the Queen lying in state and sign a condolence book at Lancaster House afterwards.

There they can also deliver tributes of up to three minutes which will be recorded for the media.

Foreign Secretary James Cleverley will be hosting their reception after the service.

Did you miss our previous article…
https://hellofaread.com/royal/im-the-queens-favourite-village-butcher-she-always-had-the-same-order/

UK will NOT engage in ‘direct conflict’ with Putin – but Russia WILL be...

Meghan Markle will give first TV interview since Megxit on Monday to promote new...

The Sun’s Corona Crew secures £250k in refunds from travel firms and airlines for...

Fortnite superstar Ninja is BACK on Twitch after quitting for failed Microsoft app in...