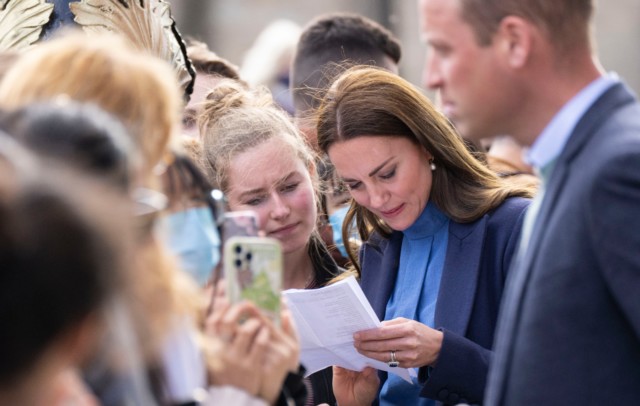 Kate Middleton studies a crossword puzzle at the University of Glasgow
Jack Baird (centre), 21, a statistics student, from Lisburn, Northern Ireland who tested the future Queen’s knowledge of royal finances

The Duchess, who has a 2:1 degree in the history of art, grabbed the print out and offered to help the stuck student.

Luckily for Kate, the answer was one that she knew and was “thrilled” to complete the tricky puzzle.

Jack said afterwards: “I was stuck on a clue, it was seven down which was ‘Forerunner of the Sovereign Grant, the funding provided to support the official duties of The Queen‘. “It was two words of five and four letters. I couldn’t get the second word.

“I gave it to Kate and asked her as I’m sure she would have known. And she said it was ‘Civil List’.

“She was very excited. It didn’t look like she was going to get it for a moment.

“She looked thrilled. I think she thought ‘I wouldn’t live this down if I get this wrong’.

Jack, of Lisburn, Northern Ireland, had been studying for his exams in the library when he saw a group of people gathering outside and wondered what was going on.

He ventured down and then revealed a bundle of old copies of The Times crosswords from his pocket.

The one Kate helped complete was The Times Concise Jumbo Crossword 1554 from Monday, May 2.

When asked about why he had one on him, Jack’s pals joked that he even takes crosswords to nightclubs.

The statistics undergraduate added: “I’m a big crossword fan and have several going at once.”

The Duke and Duchess of Cambridge were cheered by students who filmed the couple on their mobile phones as they left the university campus after spending the day in Scotland.

They had spent half an hour inside the James McCune Smith Learning Hub, speaking with students and professors about efforts to aid mental health during Covid-19 lockdown and exams. One of the university projects, DigiGallus Connect, helped get OAPs to use the internet during lockdown.

Boris Johnson battling to stay in No10 after outrage over grovelling apology for lockdown-breaking...

Ultra-rare pre-release PS5 that looks TOTALLY different turns up on eBay for $3,300 –...

Stacey Solomon shares snap from the TOILET as she uses the loo while baby...