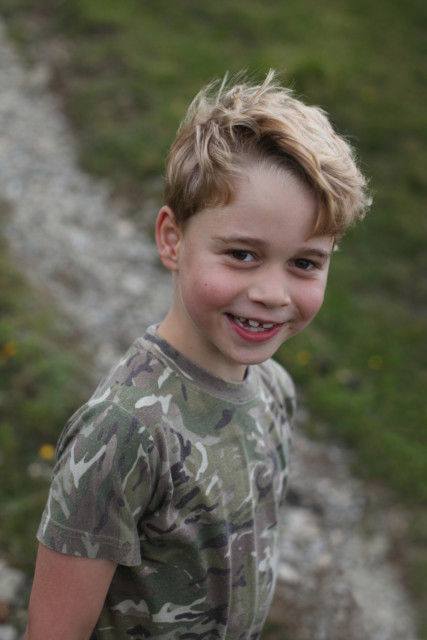 KATE Middleton has relaxed the Cambridge kids’ dress code and prefers cheap high street brands – as long as there’s no “slogans or hideous writing”, a source close to the Duchess has said.

The future king posed in a £7.99 Mango polo shirt in the official snaps, taken to celebrate his birthday today and also showed off his cheeky grin in a well-worn camouflage t-shirt.

Speaking about the Duchess of Cambridge’s fashion shift, one source said: “Kate is far happier kitting her and her three children out in ‘country  appropriate’ clothes especially since they have been spending so much time away from Kensington Palace and at Amner Hall.

“She likes relaxed, plain but practical polo shirts and T shirts from places like Mango or H&M, always minus the hideous writing and slogans so favoured by downmarket suppliers.”

The source added the Cambridges have swapped “old fashioned clothes” for “sporty, preppy, beach combing gear” – thanks to their loves of the outdoors. The family are currently living in their 10-bed, Grade II listed Norfolk retreat Anmer Hall, having left London to isolate there during the coronavirus lockdown.

“Informality is the the nub of their Anmer living, and the Cambridge clothing replicates that ideal,” one source said.

“Swimsuits and clothes from Boden, Gap and John Lewis are the mainstay of  their well stocked Amner wardrobe.

“Charlotte likes Jigsaw swimming costumes and baseball caps are sported by both boys, but not usually back to front as that is considered naff.” The siblings are currently living at Anmer Hall, Norfolk, and love polos, jumpers and jeans The Cambridges moved to Norfolk to isolate during coronavirus

According to the insiders, both George and Princess Charlotte, five, dress themselves – but are given “options” by their parents Kate and Prince William, both 38.

A source said: “Both George and Charlotte are given options.

“They dress themselves from a selection for that morning, but their clothes tend to get changed at least once a day.

“Charlotte seems to have more definite ideas about how she will look each morning, but will change into something else dependant on the weather or her sporting activities. Of course, there are still occasions when the Cambridges have to dress up

“Both George and Louis, two, do not seem to notice changes in weather or temperature – they just get wet and muddy and carry on.”

So what do the Cambridge kids pick out for themselves?

The palace insider said: “George is more of a jeans boy rather than chinos and belts. His thick mop of hair is mostly unruly.

“Louis’ hair is often paint splattered, so he has to be kept away from the indoor furniture. “Charlotte loves trendy denim dungarees, sawn off at the knees for ease of tree climbing.

“She loves a soft jumper too – all long sleeved  in a palette of stone, pebble, grey or various Oxford and Cambridge blues.”

Whereas Charlotte wears plimsolls with no socks or laces, her brothers prefer trainers and mud-splattered trainers.

The source said: “All three children wear polo shirts. Some Ralph Lauren, some Boden, some Gap, a few from Seraphina – but all high street and easily bought online.

Despite their relaxed way of living in Anmer, the kids do still get dressed up for any official events.

One source said: “If a charity food delivery is on the Cambridge agenda, the children will be cleaned up, hair washed and arrive looking more polished.”

Kate previously revealed Louis struggles with social distancing – because he wants to “cuddle everything”.

Meghan Markle sobs on the floor as the Queen scolds Prince Harry and William...

There are more evil cops like Wayne Couzens in the Met and ‘one bad...