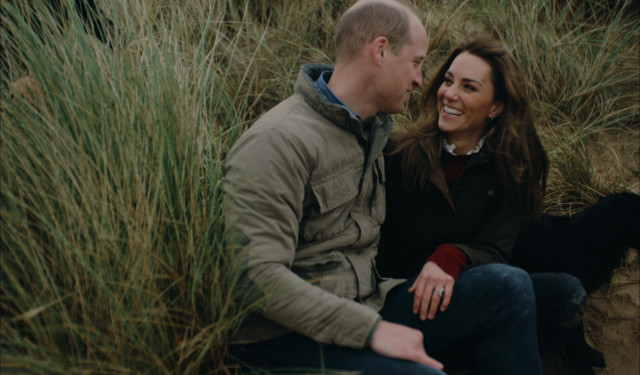 KATE Middleton and Prince William look “much more relaxed” in their new family video, now they are putting Megxit behind them, says a royal author.

The Duke and Duchess of Cambridge released an adorable video yesterday to celebrate their 10-year wedding anniversary, showing them playing with their three kids outside.

Phil Dampier said that the happy, laughing scenes show how Kate and William are comfortable in their roles, despite Prince Harry claiming they are trapped in the royal family.

The royal author told Fabulous: “I think William has realised that even if he makes it up with Harry his brother is not coming back.

“So in that sense the issue is resolved and William and Kate must now face the future without the Sussexes.

“William and Kate come across as very relaxed and content in the video and I don’t think that is just spin, it’s a genuine reflection of their happiness at the moment.” Phil Dampier said the happy, laughing scenes show how Kate and William are comfortable in their roles Relations between Harry and William have reportedly been tense, following the Duke and Duchess of Sussex stepping down as senior royals

Phil added that Kate and William have “come to terms” with their future in the monarchy, and “know where they stand.”

He added: “So they are moving forward in a positive way and not dwelling on what might have been.

“It’s too late for that and so they need, in the wise words of Prince Philip, to just ‘get on with it.’

“The video is obviously a bit cheesy but I think it is a fair reflection of where the Cambridges are at the moment.” Phil added that the video shows the happy family life shown in the video appears genuine.

He said: “William has always made it a number one priority to protect his family and to give Kate a happy and stable home life, which is what she came from.

“That is what they have tried to give their kids up in Norfolk where they can go to the beach, walk in woods and not see anyone else.

“Kate’s mum Carole spends a lot of time with them and is a very hands on gran, and they adore her. “They also look very happy to have another dog having lost Lupo, a family favourite!

“Having said that the couple both know that a lot of responsibility now rests on their shoulders.

“With the Queen aged 95, Charles, Camilla and Princess Anne in their 70s, the future of the monarchy is on them.

“They are more popular than ever and have played a blinder during the pandemic.” Speaking to the Daily Mail, body language expert Judi James also claimed the sweet footage “flies in the face” of the claim Prince Harry made during his explosive Oprah interview that his brother is “trapped”.

Describing how the Cambridge family seem to be “having the time of their lives”, the expert said: “The playful, outdoor behaviour here is all about freedom of both actions and emotions and the three children look wonderfully uninhibited as they run about having fun.”

“When children play as naturally as this with their parents it’s obvious they’re behaving as they normally would do away from the cameras.” Last month, the Duke of Sussex said he “didn’t see a way out” of the Firm in the explosive interview with Oprah.

In the candid chat, Oprah asked Harry: “Would you have stepped back if it wasn’t for Meghan?”

And he added: “My father and my brother – they are trapped. They don’t get to leave and I have huge compassion for that.”

Prince Harry and Meghan Markle stepped back as senior working royals last March, and are currently living in California with son Archie, one.

We shared how Prince Harry is ’embarrassed and awkward’ after Oprah interview – and will regret decision to quit Royals, expert claims.

Meghan, 39, claimed Archie wasn’t made a prince after “concerns and conversations” about “how dark” his skin would be when he was born.

She also revealed she had felt suicidal and “didn’t want to be alive anymore” after joining the royals.

Reality stars reveal why having sex on TV was the worst decision of their...