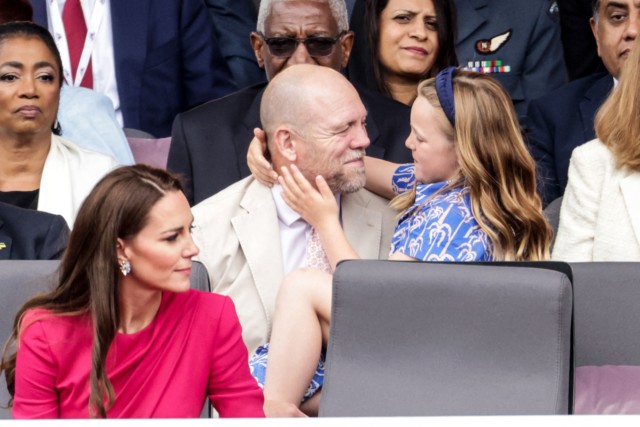 THIS weekend’s Platinum Pageant was packed full of adorable moments as the royal children stole the show.

But while the world’s eyes were firmly on adorable, cheeky chappy Prince Louis there were plenty of heart-warming moments exchanged between the other royals too.

Mia Tindall was sitting just behind The Duchess of Cambridge and her children at the pageant
In one lovely moment, caught on camera by a fan, Mia climbed over a chair to hug Kate

Despite having her hands full with her own brood The Duchess of Cambridge showed off her mothering instinct as she embraced another restless little one.

Kate, 40, gave a cuddle to Mia Tindall, the eight-year-old daughter of Mike and Zara Tindall, after she clambered over the seats to reach her.

The moment was captured in a short clip posted on Twitter by a fan of the royals.

The Duchess of Cambridge can be seen stroking Mia’s arm and straightening her hair as the she whispers something in her ear.

Read more on the royals The spectacular pageant, which was held on the final day of the four-day Platinum Jubilee celebrations, was attended by many of the royals including the Cambridge family and the Tindalls.

Zara Tindall, 41, and her husband Mike, 43, a former England rugby ace, were in attendance with their two oldest children Mia, and Lena, three.

The two families were sat next to each other with the Tindalls sitting in the row directly behind William and Kate’s clan.

Throughout the parade the two families interacted, chatted and laughed with each other.

At one point during the celebrations, it appeared that Mia was upset so she climber over the chair in order to curl up onto Kate’s lap and rest her head on the royal’s shoudler.

Even little Princess Charlotte noticed and offered the kind gesture of rubbing her back to comfort her.

‘Furlough help’ set to continue for nightclubs which are still shut as Gov vows...

Roblox: what is it, how does it work, and is it safe for kids?