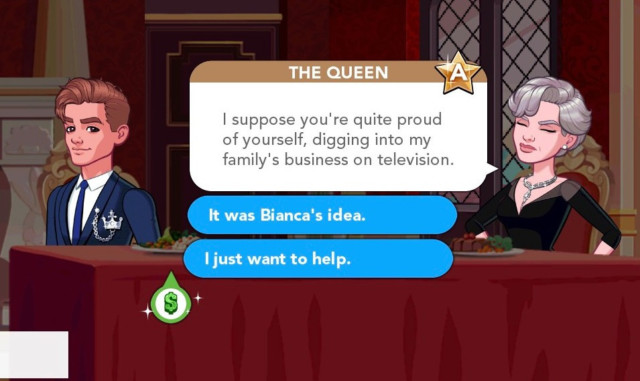 KIM Kardashian’s smart-phone game has been accused of cashing in on Megxit — with a prince and his actress bride trying to escape the Queen’s clutches.

Her “Hollywood” app — in which players try to become A-list celebs — has launched a “Royal Runaways” level, which takes a swipe at the “cold and distant” monarch. They give an Oprah Winfrey-style interview in which Bianca says: “Prince Aston has done everything in his power to welcome me into the Royal Family.

“Unfortunately, I can’t say the same about everyone in his family.

“The Queen is a symbol of tradition, but as times change, perhaps some traditions become outdated.” Meanwhile, the Queen brands the couple “selfish and irresponsible”.

Fan Lily Tonner, who has been playing the game for five years, told HOAR: “I was really shocked.”

The 24-year-old, from Rainham, Kent, added: “The two characters are obviously based on Meghan and Harry.

“The Queen speaks quite rudely in it.

“It’s in poor taste considering everything she has been through recently.” Kim Kardashian: Hollywood, released in 2014, is free to play but rakes in millions through in-game purchases costing up to £99.99 a time.

The player is tasked with holding an auction to help the prince and princess “once they break away from the Royal Family” — while a cartoon Kim jets off round the world to distract the Press.

Afterwards, Bianca encourages the player to “interview me about my experience with the Royal Family”.

Later, she says the TV chat “shook the crown”. Players say the game includes a ‘cold and distant’ monarch A palace meeting is set up with the Queen, like the real-life Sandringham Summit.

The Queen tells the player: “I suppose you’re quite proud of yourself digging into my family’s business on television?”

Bianca announces: “After much contemplation and deliberation my husband and I have decided to . . . LEAVE the Royal Family.” Prince Aston adds: “There is nothing I wouldn’t do to ensure my wife’s happiness.”

A message from Kim Kardashian then appears on screen, saying: “I fully support my friends @Prince_Aston and @Princess_Bianca in their decision and wish them all the best from the very bottom of my heart. #FriendsForever.” Why wont the Liberal Democrats appear on ITVs debate tonight?

MPs & experts slap down plans for extra taxes on meat as part of...