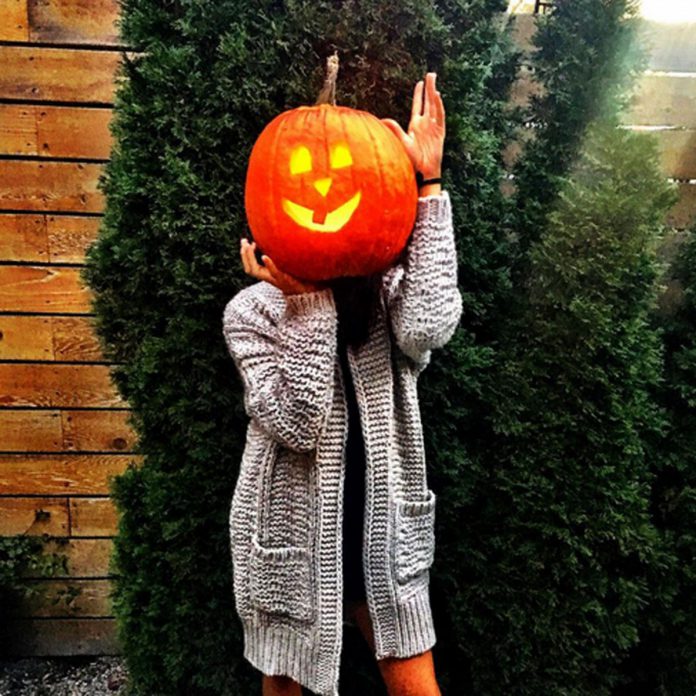 BEFORE Prince Harry and Meghan Markle announced they were officially a couple, they enjoyed some secret dates, away from the limelight, to get to know each other.

The lovebirds even celebrated one Halloween together with Meghan Markle uploading a photo of their date to Instagram without the majority of fans realising its significance.

Back in October 2016, Prince Harry jetted to Toronto for the secret visit to his famous girlfriend.

She was filming Suits at the time and the pair was doing their best to keep their relationship away from the public eye.

But Meghan posted a Halloween photo on her Instagram account, before the page was deleted, right when the Prince was staying with her.

The sweet photo shows what appears to be Meghan in a chunky knit cardigan, hiding behind a huge carved pumpkin with a smiley face.

So did the lovebirds spend their Halloween carving pumpkins and watching scary films like the rest of us?

Allegedly, they ventured out to aHalloweenparty in Toronto andHarrywas said to have been trick-or-treating behind a mask.

Residents of Toronto neighbourhood The Annex say they saw two blacked-out SUVs with security guards, believed to be Harrys, around for days.

A Canadian cop car was also seen parked down the street.

According toThe Star in Toronto, Meghan and Prince Harry went to a Halloween party during his time in the city.

Meghan Markle and Prince Harry are said to have been snuck in Soho House, which costs around 1,700 a year to join

A source told The Sun: Shed been to London several times but this was the first time hed been to her home city.

They havent been to bars or clubs because they were worried theyd be spotted.

Instead its been cosy nights in with wine and good food. Harry loved every minute of it.

It’s not completely clear how or when Meghan and Prince Harry first met but it’s thought the couple’s relationship is said to have blossomed with the help of Soho House director Markus Anderson.

He is also thought to have pulled some strings and arranged for the lovebirds to meet secretly in private rooms at his club in Toronto.

In late October 2016, it was first reported that glamorous actress Meghan, who played Rachel Zane in legal drama Suits, was dating Prince Harry.

On November 8, 2016,Kensington Palace confirmed the pairing with a statement, saying the Prince was worried for her safety.

And by February 2017, pals said actress Meghan had virtually moved in to Harrys cottage at Kensington Palace with the couple having been inseparable for weeks.

Last year, the couple spent Halloween in New Zealand as part of their 16-day royal tour, and visited the lakeside town of Rotorua.

We shared how Meghan, Harry and Archie are to spend Thanksgiving in US with gran Doria before Christmas with the Queen in six-week holiday.

But the tot is due to spend his first Christmas atthe Queens Sandringham estate in Norfolk with the rest ofthe Royal Family.

Seven Emmerdale spoilers for next week including Faith Dingle’s return

Distraught mum gets $20,000 refund after Fortnite addict son splashed it on Twitch game...