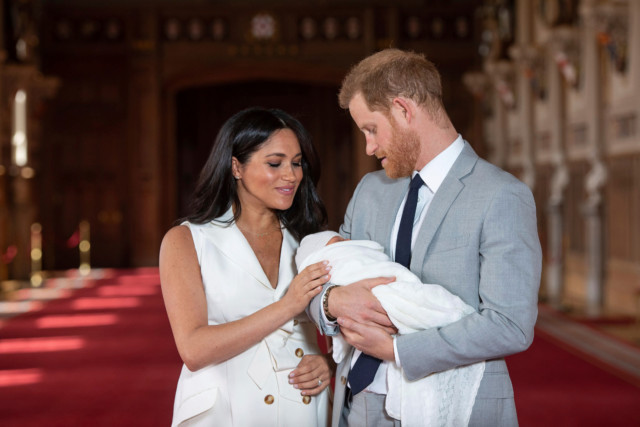 MEGHAN Markle and Prince Harry reportedly rejected an Earl title for Archie because it contained the word ‘dumb’.

The Duke and Duchess of Sussex decided against the title Earl of Dumbarton for their son because they allegedly feared it would attract unfortunate nicknames.

– Read our Meghan and Harry live blog for the latest updates

The couple are currently living in the US, where the word dumb is commonly used as slang for stupid.

A source told The Telegraph: “They didn’t like the idea of Archie being called the Earl of Dumbarton because it began with the word ‘dumb’ [and] they were worried about how that might look.”

Another insider added: “It wasn’t just Meghan who pointed out the potential pitfalls, it also bothered Harry.”

Dumbarton’s MSP Jackie Baillie last night laughed off the rejection, tweeting that she was reflecting on the ‘low blow’ and will issue a statement in the morning.

Instead he goes by his full name Archie Harrison Mountbatten-Windsor.

It was previously thought his parents didn’t want him to have a title to allow him to lead a more “normal” life.

But in their shock interview with Oprah Winfrey, Meghan hinted otherwise.

Meghan and Harry spoke about Archie’s title with Oprah

She said she and Harry were told Archie would not receive security as he was not a prince, telling Oprah: “All the grandeur around this stuff is not really important to me.

“But in those months when I was pregnant, all around same time: we have in tandem he won’t be given security, a title and also concerns and conversations about how dark his skin might be when he’s born.”

Sources also suggested to the Telegraph that Harry “feared” when his dad became king, he would change the George V convention which automatically makes the grandchildren of a monarch a prince or princess.

It has since been reported that Prince Charles plans to slim down the monarchy – tweaking the rules to ensure his grandson Archie is never given the title of Prince.

He believes the public no longer wishes to pay for a growing monarchy, and has told senior Royals he wants to cut down on working members of the family.

The heir to the throne reportedly told sources close to the Sussexes that he plans to change key legal documents to ensure his great-grandson cannot get the title he would have once inherited by right.

The Earl of Dumbarton title was first created in 1675 but became extinct in 1749 when Lord Dumbarton’s only son died.

The title was recreated in the UK Peerage by the Queen as one of the two subsidiary titles for her grandson Harry, when he married Meghan in May 2018. Prince Charles is said to be planning a slimmed-down monarchy