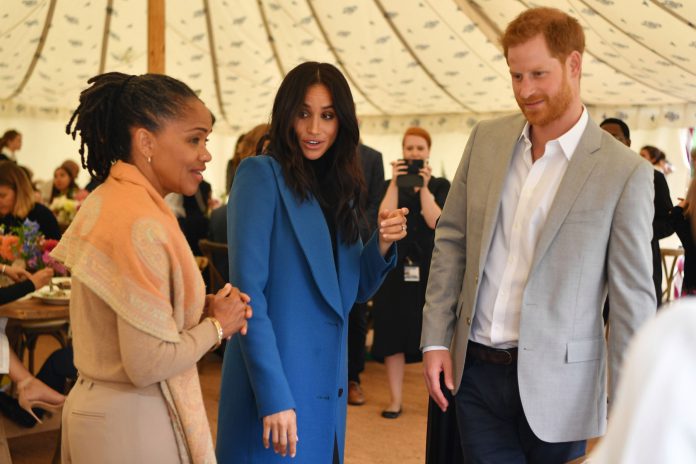 MEGHAN Markle and Prince Harry spent Thanksgiving on a long-time trip to the US where they celebrated with close family, it has been claimed.

The Duke and Duchess of Sussex are currently undertaking a six-week break from royal duties, although Buckingham Palace has remained tight-lipped on their whereabouts.

Meghan Markle and Prince Harry spent Thanksgiving with ‘close family’ on a ‘long trip to the US’, says Omid Scobie

However, royal correspondent Omid Scobie said on his HeirPod Podcast they headed across the pond to spend the holiday privately.

It follows weeks of speculation that the new couple would take baby Archie to celebrate his first Thanksgiving in LA with Meghans mum Doria Ragland.

Omid said: The Sussexes are away, they’re on their break right up until Christmas.

They celebrated Thanksgiving privately with close family, which is lovely.

This was Meghan and Harry’s first Thanksgiving as new parents to baby Archie, who was born in May

Today the couple will be absent for the Queen hosting NATO leaders at Buckingham Palace, and Royal Producer at ITV News, Lizzie Robinson, said: We know they’re away, they’re not even in the country.

Omid added: It’s a long-time trip that they’re on, I think we are really going to see them away until Christmas as far as I’m aware, which is good for them.

He said an aide had told him the couple welcomed the break.

It is said that Meghan got stuck in and cooked the Thanksgiving meal for her family, claims a royal expert

This was Meghan and Harrys first Thanksgiving as a family of three, after their son Archie was born in May.

Markle, who was born in Los Angeles, was said to be keen to spend the November 28 holiday with her mum, and wants her six-month-old son to grow up aware of his American heritage.

It is thought that yoga instructor Doria would likely be hosting Harry and Meghan at her home and the getaway may extend until after Christmas.

It was expected that food-loving mum would do the cooking, and the family would opt to not have any staff present.

Katie said: Meghan loves being in the kitchen.

She’s a talented chef and takes great pleasure in bringing people together over a family meal.

’There won’t be any staff helping her – she’ll definitely be wearing the apron.

It has already been announced the Sussexes will not be spending Christmas Day with the Queen and Duke of Edinburgh at her private Sandringham estate in Norfolk.

The Queen is said to be supportive of Meghan and Harry’s plans and it follows the Duke and Duchess of Cambridge’s past decision to spend Christmas with Kate’s parents, and not with the Queen.

Food fanatic Meghan used to give recipes and tips on her blog The Tig before she met Harry.In other royal news, William and Kate will be at Sandringham for Christmas with George, six, Charlotte, four and Louis, one.

Ministers back Buckingham Palace over Harry and Meghan split but warn Prince will...