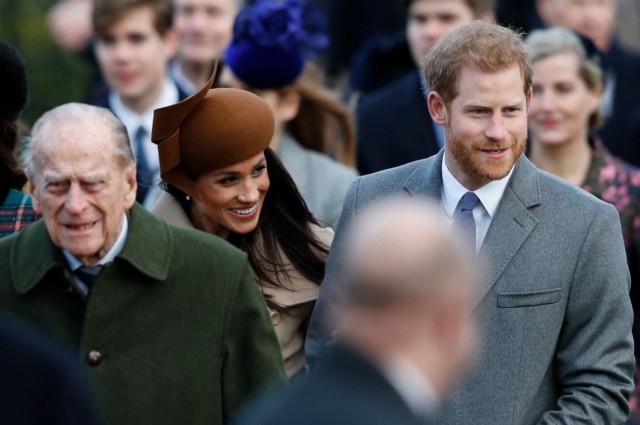 MEGHAN Markle issued a press release ahead of Prince Philip’s funeral to announce she would be watching the ceremony from home.

The Duchess of Sussex confirmed she was observing the historical burial stateside in a press release delivered by her and Harry’s ‘Global Press Secretary’.

The heavily pregnant 39-year-old stayed in the US on doctor’s orders while Prince Harry made the 5,400-mile trip ahead of the event.

It also touched on the reasons for her notable absence, and read: “I can confirm that The Duchess will be watching from home as she was hopeful to be able to attend, but was not cleared for travel by her physician at this stage in her pregnancy,” the Mail reports.

The statement went on to describe Harry and his late grandfathers relationship, and their “unique connection in their shared active service – including in combat – as part of the British Armed Forces.”

It continued by listing Harry’s achievement throughout his ten-year military career, touching on his two tours of Afghanistan.

But the announcement ruffled a few feathers in royal circles, who were displeased with the couples promoting tact – as the press release later mentioned the wreath the couple had laid for Phil in St George’s Chapel.

They hand-selected flowers in a tribute to the late Prince’s life.

Details on the floral tributes from members of the royal family were not released, as they were “personal and private”, Buckingham Palace said.

Harry and Wills were reunited at their late grandfather’s funeral The Palace also confirmed those who were unable to attend would make “private arrangements” to mark Philip’s life.

A source close to the Sussexes confirmed to The Times that Meghan watched the service through a special live stream with Archie from the couple’s home in California.

She also left a handwritten note remembering the Duke of Edinburgh along with the wreath.

Meanwhile, Prince Harry was reunited with his father Charles and Prince William – sparking hopes the long-running brotherly rift could be squashed.

Charles had private talks with his warring sons after the Duke of Edinburgh’s funeral — and insiders say it is just what Philip would have wanted.

The three met up away from the cameras following Saturday’s televised service. Harry may now stay on for the Queen’s 95th birthday this week, her first without her husband by her side in seven decades

In the wake of the reconciliation, Harry may now stay on for the Queen’s 95th birthday this Wednesday.

It will be the first without Philip in seven decades – and she will only be surrounded by the members of staff who make up her “Windsor bubble”.

An official portrait to mark her birthday is unlikely, as she is still in the official mourning period for her treasured husband.

Her Majesty was forced to sit alone inside the chapel as she paid a final farewell to Philip, due to covid restrictions.

Heartbreaking images showed the Queen sat solemnly on the empty pews, as her family members sat metres away, unable to comfort her.

As the 30 limit rule does not include clergy, the Archbishop of Canterbury and the Dean of Windsor presided over the service on April 17, 2021.

A small choir of just four people, including one soprano, sang pieces of music chosen by the duke. I waited until midnight to buy three copies of Prince Harry’s book – I...

Kate and William ‘hope for better 2021’ as they pay tribute to grieving families...

What would an Irish Border look like after Brexit?