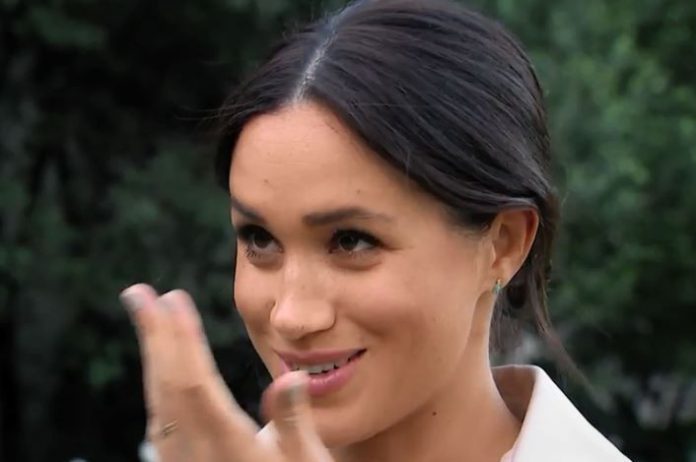 ROYAL fans are gushing over Meghan Markles nickname for Prince Harry after she let slip she calls him H.

The Duchess of Sussex revealed her pet name for husband as she chatted to Tom Bradby on their ITV documentary Harry and Meghan: An African Journey.

The 38-year-old opened up about her marriage and life as a new mother and as she was chatting she accidentally shared her secret name for Prince Harry.

She was asked about how shes coping with her new role as a royal in the spotlight.

The mum to Archie replied: “You know, Ive said for a long time to H, thats what I call him, its not enough to just survive something.

Thats not the point of life, you have to thrive, youve got to be happy.

I think Ive really tried to adopt this British sensibility of a stiff upper lip.

Immediately realising she’d accidentally revealed her pet name for him, she quickly covered her mouth with her hand and giggled.

While she went on to talk about how she’s trying to adjust to her new life, viewers were quick to pick up on her revelation.

What an amazing couple! Genuine, loving and passionate! They care about the work and organisations they support and each other!! On a side note I adore that she calls him 'H' xx

…she calls him H

I really like #HarryAndMeghan & watching #RoyalTourAfrica hasn't changed my mind. Also love that she calls her husband H, I asked my boyfriend just now if I can call him that but he refused

Royal fans have claimed the nickname is adorable, as they declared they were going to adopt similar ones for their partners.

Commenting on Twitter, one person said: What an amazing couple! Genuine, loving and passionate!

They care about the work and organisations they support and each other!!

On a side note I adore that she calls him ‘H’.

Awe she calls him H

Someone else said: Awe she calls him H.

A third wrote: Meghan calls her husband H. I cant!

This person tweeted: Im now only addressing my partner as J letters only in our house please.

Its not the first time Meghan has let a nickname slip, after she accidentally called Prince Harry my love at the theatre.

She also opened up about Prince Harry and her marriage in the documentary, talking candidly about their love story.

Meghan said: I would hope that people, the world, will get to a point where you just see us as a couple whos in love.

Because I dont wake up every day and identify as anything other than who Ive always been.

Im Meghan and I married an incredible man.

This to me this is part of our love story.

In a clip from the documentary Prince Harry revealed Meghan living under the same pressures as his mum was his biggest fear.

And another clip showed her holding back tears as she revealed her struggle as a vulnerable pregnant woman and new mum.

In more royal news Meghan Markle and Prince Harry have apologised for their awkward typocalling it a hiccup in new Instagram post.

Prince Harry is putting the Queen in a tricky spot by expecting her to...

Sunak squirms as he’s accused of ‘stabbing Boris in the back’ at first hustings...