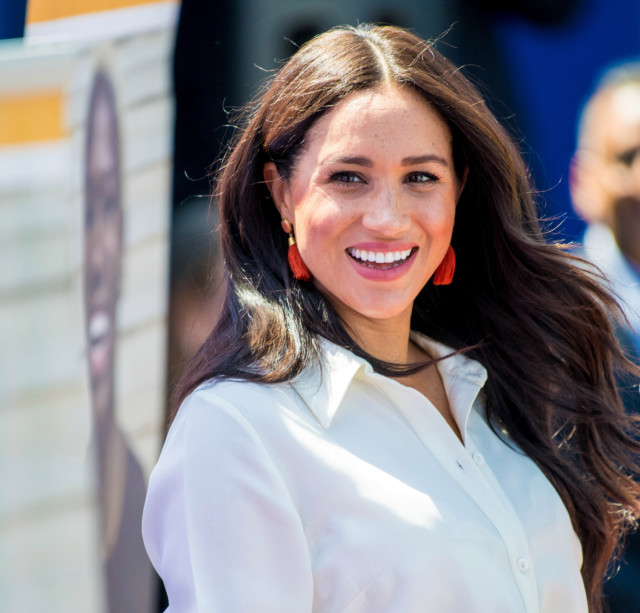 MEGHAN Markle took Prince Harry on a secret tour of her old high school in Los Angeles where she performed as a child, HOAR can exclusively reveal. Now, her former drama teacher has claimed she sneaked the Duke in to give him a grand tour last month.

In an exclusive interview with HOAR, Gigi Perreau, 79, who taught Meghan as a child, said she was told of the visit by staff at the all-girls Catholic school in the Los Feliz neighborhood, along with other alumni.

Gigi, who Meghan was seen waving to after spotting her teacher in the crowd from her carriage on her wedding day in May 2018, says she was “delighted” to hear of the visit. She said: “I happened to be speaking to someone from the school and he told me that Meghan had brought her husband and showed him around. I thought that was really kind of fun.

“I believe it was the beginning of last month, there were no students there, just one woman who is in charge of publicity and things for the school, she was the one who took them around.

“The alums certainly know about it. I was delighted that Prince Harry got a chance to see the school and see the lovely stage that Meghan performed many shows on. “I think it’s a very special place and I’m glad that her years there were so important to her that she wanted to share that with him.

“There’s a lovely camaraderie, a sisterhood, and pandas are our mascot. Even sometimes on the alumni Zoom we have on weekends they say, ‘Well Panda Meghan said..’ and laugh about it.

“I belong to two different alumni associations. I went to school there and graduated in 1958, and then I taught there for 23 years and there’s something about the school.”

HOAR reached out to Immaculate Heart and a spokeswoman said staff were unavailable for comment.

Gigi, a 1940s film star in her own right, previously traveled to London to help report on the royal wedding for British media outlets.

She was delighted when Meghan reportedly gasped “Oh my God” after recognizing her amongst the thousands of fans lining the streets following her nuptials at St George’s Chapel.

“Adorable” Meghan, as Gigi describes her, performed in a number of plays at Immaculate Heart before becoming an actress on TV legal drama Suits, including Annie and Into The Woods. “She did many plays and then she did some with Loyola High School which is a boys school, the partner school, she was definitely someone that stood out,” she said.

“Meghan was very dedicated when she was on stage, she always knew her lines, she was very professional, even in high school. She was an outstanding student and dynamic.”

Back in June, Meghan addressed her alma mater in a powerful six-minute video for their virtual graduation, in which she reflected on George Floyd’s tragic death and offered hope and encouragement.

“I’m so sorry that you have to grow up in a world where this is still present,” she told students.

“I wasn’t sure what I could say to you. I wanted to say the right thing and I was really nervous that it would get picked apart. And I realized the only wrong thing to say is to say nothing.”

She went on: “You know that you’re going to rebuild, rebuild and rebuilt until it is rebuilt. Gigi described the video as “heartfelt” as Immaculate Heart students remained at home during the Covid-19 pandemic which has seen schools shut for a number of months.

“It was just very charming, heartfelt, and very lovely for them to be comforted,” she said.

“It was from the heart and off the cuff and I think the girls were very moved by that.”

The retired teacher admits she was surprised the 39-year-old and husband Harry, 36, decided to leave the royal family after stepping away from their senior roles earlier this year. “I’m a little surprised. I personally thought if anyone could handle the pressures of that kind of life and would be able to really make a huge wave in the world [it would be her],” she said.

“I was kind of hoping that it wasn’t going to be too much for her, because I find her a very intelligent, very strong young woman with good ideas.

“When I found out she was leaving and it was a tremendous amount of pressure for her, I just hoped whatever decisions they made would be good ones.”

But she feels going into politics is not something they should do, amid rumors Meghan may one day want to run for President.

The couple have recently been criticized for making political statements, seemingly supporting Joe Biden ahead of the election “I don’t think there are that many Americans, frankly, that really would put much credence in what Prince Harry and Meghan would say politically, I can’t imagine that,” she said.

“I think she can do much more as Meghan Markle, as the Duchess of Sussex, if she continues to have that title.”

“I think maybe filming for Prince Harry [would be] a documentary about the wounded warriors, a group that he’s so involved with. The pair moved into a $14.7million home in Montecito after ditching life in Britain

“And I think Meghan, as far as her interests, maybe children’s programming, dealing with some biracial issues for young people.

“I think that they’re capable of coming up with some interesting programs that would be very good on Netflix.

“I wish them the best and I’m hoping that it works out and they do something fulfilling for both of them. That would be lovely.”

Gigi is also glad Meghan and Harry are settling into their new $14.7million home in Montecito with their young son, Archie, but hopes they can go back to visit Britain.

“I think his grandmother [the Queen] is very special to him and I know she absolutely adores her grandchildren,” she said.

“As a grandmother myself, I can understand the pain of not having them close by. I’m hoping they’ll be able to travel back and forth a little.”

Prince Harry and Meghan book will blame Prince William for rift and ‘paint him...