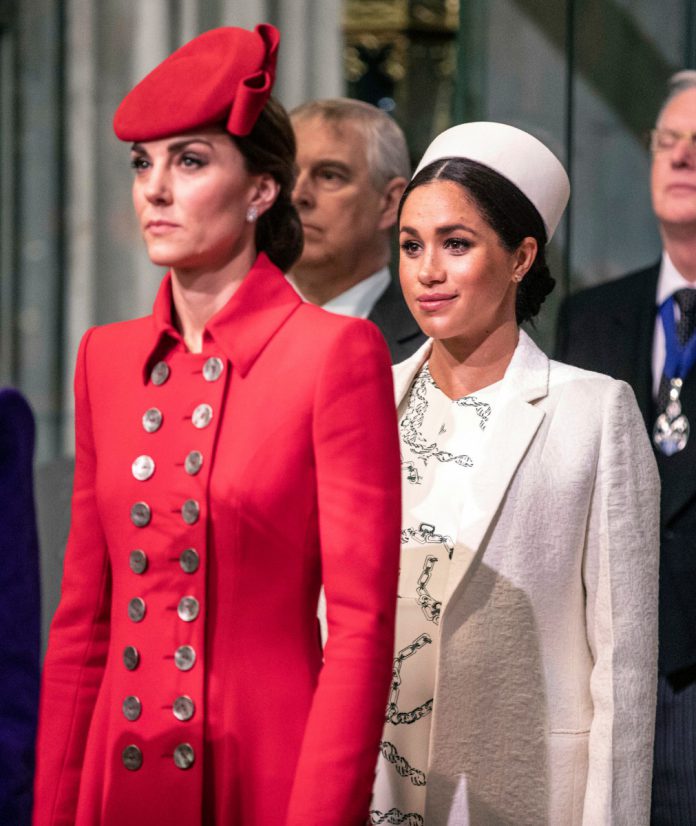 MEGHAN Markle is conscious she is being “pitted against” Kate Middleton, its claimed.

A royal source reportedly claims the Dutchess finds this situation with her sister-in-law “challenging”.

The insider told People Meghan and Kate are on “different paths”.

A pal said: “Meghan is very aware that Kate [Middleton] will be queen; their roles are very clear.

“Meghan doesnt fit the mould while Kate was groomed for this.

“Whats challenging is when they are pitted against each other.

“Thats been challenging to both of them. Meghan has her life, Kate has hers.”

But instead of being competitive against each other, the source claimed that both women are more focused on their families.

Markle, 38, welcomed her firstborn Archie in May of this year.

The claims come after Meghan revealed in an emotional ITV documentary which aired last month about her and Prince Harry.

The Duchess of Sussex was close to tears as she described herself as having felt “vulnerable” while speaking about being a new mum.

During the interviews Harry said he has grown apart from brother William, and Meghan admitted she is struggling to cope as a new mum in the spotlight.

In the documentary, Meghan said that keeping quiet and having a “stiff upper lip” about the scrutiny she faces is “damaging”.

Rumours of the feud began after claims Meghan had been branded “Duchess Difficult” by Palace insiders after another of the Duke and Duchess of Sussex’s aides – Samantha Cohen – resigned from her role.

There were also claims Kate had told Meghan not to berate members of her team after she reportedly “b****cked” a member of staff.

The row – which the Palace has denied – followed rumours that Kate, 36, was “left in tears” during a “stressful” fitting for Princess Charlotte’s bridesmaid dress.

Inside Sarah Ferguson’s former mansion that fell into disrepair after she was exiled in...

Molly-Mae Hague hides under a coat with her new bodyguard after hiring 24/7 security...

Strictly star Tony Adams risks feud with Katya Jones after naming one of his...