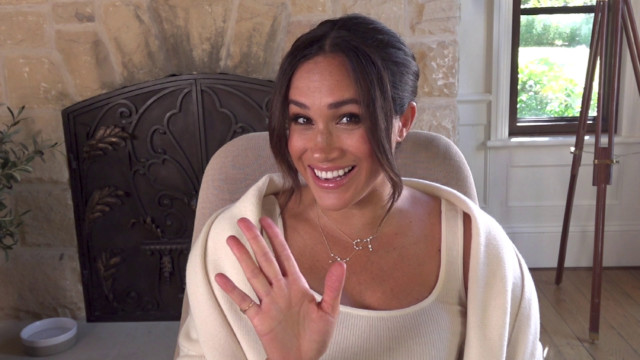 MEGHAN Markle’s much-hyped 40th birthday campaign has reportedly been quietly dropped – less than a year after it was launched.

The duchess asked A-listers including Adele and Stella McCartney, as well as members of the public, to donate 40 minutes of their time to “help women re-entering the workforce” for her 40×40 project.

Meghan Markle launched the 40×40 campaign on her birthday last August – but the scheme has been quietly dropped, it’s claimedThe duchess called for her celeb friends and members of the public to donate 40 minutes of their time to help women get back into work after the pandemic

She promoted the initiative in a glitzy comedy video recorded at her home in exclusive Montecito.

But less than 10 months on, there has been no follow-up on the campaign, which also featured comedy star Melissa McCarthy.

Now royal expert Angela Levin, who spent a year with Prince Harry as she wrote his biography, said she thinks 40×40 has been “cancelled”. Meg ‘STILL not spoken to dad’ despite claims she tried to reach out, sis says

She told Sun Online: “I read some time back it had been quietly dropped.

“I think it’s very quietly gone into the dustbin.

“Most people didn’t see the point in spending time changing the way people are.

“It’s absurd to think you can change somebody.

“You’re not going to tell them how to do an interview in such a short time, or if someone’s low or depressed you can’t do that in 40 minutes either. It’s totally unrealistic.”

In her plea for support, Meghan said: “In reflecting on my 40th birthday and the many things I am grateful for, I’m struck that time is among our most essential gifts.

“Time with our loved ones, time doing the things we love, time spent learning, laughing, growing, and the sacred time we have on this earth.

“Amongst the most valuable gifts of time is also time spent in service to others knowing that it can contribute to incredible change.

“To that last point, and with my 40th lap around the sun in mind, it made me wonder: what would happen if we all committed 40 minutes to helping someone else or to mentoring someone in need?

“And then what would happen if we asked our friends to do the same?”

Princess Eugenie, a friend of Meghan’s, did acknowledge the scheme in a sweet Instagram post last year, and said she’d signed up to donate 40 minutes of her time.

It’s not known if any of Meg’s celeb friends committed to helping.

Angela said it’s just one of the royal’s ideas which “didn’t come off”.

“Wasn’t Meghan going to write another two or three books?” she said.

“That hasn’t come off. “I think the PR team gives off things that don’t happen.”

Sun Online has asked reps for Meghan for comment. Police to join teachers in being prioritised for Covid vaccine in next phase of...