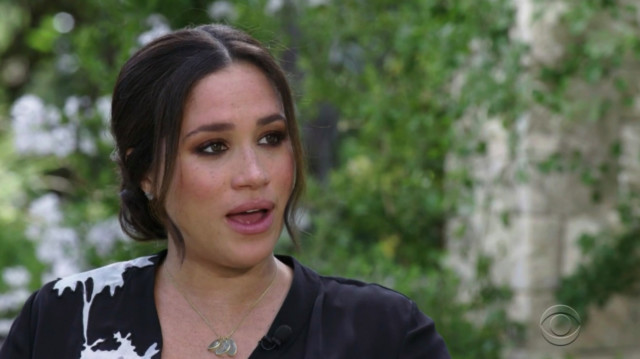 MEGHAN Markle’s friends say she has “no regrets” about her interview with Oprah Winfrey, and that the Royal Family should be “relieved” she didn’t name names.

The Duke and Duchess sensationally revealed details of their royal life in the two-hour chat – which was the “best decision” Meghan ever made and she “couldn’t be happier” with the result.

Speaking to Oprah was the ‘best decision’ Meghan made, according to her pals Meghan and Harry alleged that a senior royal asked Harry how “dark” Archie’s skin tone would be – but during the chat, they refused to point fingers.

But despite making the serious allegations and revealing a thread of insider information about the inner workings of the Palace, a friend of Meghan’s said doing the interview was the “best decision she made.”

An insider with close ties to Meghan told DailyMail.com: “Meghan said she has absolutely no regrets about what was said during the interview and that speaking with Oprah was both cathartic and transformative – the best decision she ever made, other than marrying Harry.

“Meghan said the Royal institution should be relieved that she didn’t name names or go into even more details of what went on behind closed doors.

“Meghan said waiting to share her story with the entire world seemed like an eternity and that she couldn’t happier with the end result.

“She said she’s moved on, but is open to communicating with anyone from the Royal family who wants to engage in a constructive conversation.”

The insider also said that the chat with Oprah was especially nerve-wracking for Harry, and that Meghan is “incredibly proud” of her “prince” regardless of his title.

This comes a day after Her Majesty, 94, released a statement after the couple’s bombshell Oprah interview and said the Royal Family took the allegations “very seriously”.

The Queen said the incendiary claims a member of the family raised concerns over the colour of Archie’s skin would be investigated and “addressed privately”.

Her unprecedented response came after the tell-all Oprah chat that saw Meghan, 39, break down in tears as she and Harry, 36, revealed the pressures they faced within the Firm.

The 55-year-old stepped down from GMB last night after senior execs wanted him to say sorry on air following contact from the Duchess.

Meghan raised concerns with ITV’s CEO after Piers said he didn’t believe she had suffered suicidal thoughts. The Duchess is said to have been worried it would affect others struggling with similar issues.

The presenter, 55, made a series of dismissive comments about Meghan’s claims she was “suicidal” and suffered issues with her mental health while a royal.

The 39-year-old Duchess told Oprah Winfrey she felt like she “didn’t want to be alive anymore” in her bombshell interview on Sunday.

She said she begged for help from the Firm after struggling with her mental health – saying it was her husband who “saved” her.

Breaking down in tears, pregnant Meghan said: “I just didn’t see a solution.

“I didn’t want to be alive anymore.”

And she said when she reached out for help with the Palace’s Human Resources team, she was told because she was not a paid employee, she could not be supported.

But on Monday’s Good Morning Britain, Morgan said he “didn’t believe a word” of it.

Meghan and Harry also revealed a string of secrets while speaking to Oprah in California – including the fact they were married in secret three days before their wedding at Windsor Castle.

The Duchess said the couple married ‘in our back yard’ on the Wednesday before the wedding which was watched by millions around the world in May 2018.

Meghan told Oprah: “Three days before our wedding, we got married.

“No-one knows that but we called the Archbishop [of Canterbury] and we just said ‘this thing, this spectacle is for the world but we want our union between us’.

“The vows that we have framed in our room are just the two of us in our back yard with the Archbishop of Canterbury.”

Harry added: “Just the three of us.”

The Duke also said his relationship with brother Prince William is ‘space’ after he claimed his family are ‘trapped’ by their royal duties.

The Duke of Sussex told Oprah Winfrey in a bombshell two-hour interview that he wasn’t happy in the Royal Family despite “pictures of me smiling”.

“I was trapped within the system like the rest of my family are.

“My father and my brother, they are trapped. They don’t get to leave – and I have huge compassion for that.”

There was former speculation that the bombshell interview with Oprah was going to be cancelled because of the Duke’s ill health – but both broadcasts by CBS and ITV went ahead.

European Super League: Boris Johnson will ‘look at all the options’ to stop football...